As it’s October, the month of all things scary, why not take this opportunity to have a look at what makes Jason Voorhees (In My Opinion) the PERFECT killer. 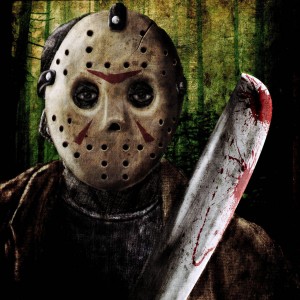 Now for anyone unfamiliar with Jason Voorhees and the Friday the 13th movie series (Where have you been hiding I may ask), Jason was an ordinary boy who like many others spent a summer at Camp Crystal Lake summer camp. However one fateful day when the camp councilors were absent from the job, Jason drowned. He didnt quite die though, instead he gathered a rather unique bond with the lake, which unlike most other killers proved to be a unique aspect.

I mean everytime he is apparently killed he somehow gets ressurected at the lake, and how can you simply destroy a lake without a TONNE of work involved. Jason acts as the guardian of the lake and along with his trusted machette dispatches of any camp councillor who have abandoned there jobs and doing the dirty. Most of Jasons kills are creative and utilise the area he knows only too well, Camp Crystal Lake. Unlike lots of movie monsters, theres nothing glamourous about his kills, most of the time they are done with just that machette

Jason shares a unique bond with his mother too, and she is the only one who can COMPLETELY control him. This makes him even more unique in aspects, as where he clearly doesnt care who or what he is killing, he still has that bond with his mother where he listens to her unconditionally, a side which is not often shown for killers. His mothter is able to control him to stop what he is doing, even in the middle of a kill. He even goes as far as to keep his mothers decapitated head on his bed side table. This angle was used creatively in part 2 when our heroine was about to meet her grisly end, she carried a trinket which belonged to his mother, and this ultimately saved her as Jason became completely fixed on it as it belonged to his dear mother.

The only disappointing aspect of Jason Voorhees was the fact that as the series went on it got a little stupid and decided to break away from the lore and send him to new york and space for some bizzare reason, but we will steer away from those, even though as their own films, they were rather entertaining.

Its hard to keep a villian fresh over so many films too, however with Jason I think they achieved this very well and each new chapter added a lot to the series. Even the cross over with Freddy Krueger proved well. And as you can see from the ending Jason CLEARLY displayed his dominance over Freddy, but as we all know the greatest villians never truly die, but Jason won that round convincingly and even ended up with a new trophy for his collection.

Do you agree with me on this? Is Jason the best movie villian ?  Or is there someone more deserving of the crown?

Previous Last-gen gamers get a free upgrade to current-gen Call of Duty: Advanced Warfare
Next The Nintendo Download brings a hotly anticipated demo in Bayonetta 2