Its the month of scares and the prequal to The Conjuring tries its hardest to scare the audience but ultimately falls short at the final end. 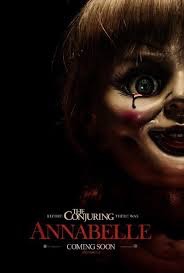 The film immedietly picks up with the same intro as the Conjuring which recounts the story of a nurse acquiring the annabelle doll and recounting how her reign of terror affected her and her friends. The movie then shifts to our main character John and Mia who are expectanting their first born. For some bizzare reason John buys her the ever creepy annabelle doll (i can see for no reason at all why you would want it) yet she adds it to complete her collection. We then shift tonight where Mia sees a vision from next door which leads to John investigating and ends up with Mia surrounded by cult members and Annabelle herself who wants her child, which leads to the male stabbing her in the chest. As the story progresses we see how the annabelle doll continues to terrorise Mia which even leads to a house fire, this scene also leads to Mia giving birth the Lia,  which FINALLY forces the young parents to get rid of the Annabelle doll, well we all know whats going to happen. Now located in an apartment block in Pasadena this is where the majority of scares happen. The annabelle doll continues to terrorise the family. The family befriends a priest and a friendly women who runs a local book shop called Evelyn who seeks comfort in the family after tragically losing her own daughter. Mia isterrorised by the annabelle doll by using Lia as a Conduit, the couple learn that the demon which is haunting them does not want Mias soul, but Lias. Lia goes to great lenghts to protect her child, theres even a scene where you think she has killed her own baby which i must admit was tough to watch. The ending proeved to be a little predicatable, but it did tie in nicely to the conjuring.

The scares which follow are effective, and yet a little samey this is where it starts to fall apart, as it falls onto the same track as pretty much every paranormal and excorsism film. The Film ends predictably which is a shame but there was some positives to take away.

The music was really well done, and added well to the atmosphere of the film.

The scene in the elevator was really, really well done and tense coupled with some great camera work and atmospheric music. The main characters of John and Lia were played really well, with john acting as the concerned husband and father and Lia being the maternal Mother who only wants best for her family.  The demon looked terrible and this is where my major gripe with the film begins, up until the demons reveal the film was really atmospheric and tense but seeing what looked like a guy in a mask and black scuba suit really lowered the tone, in my opinion it wold have been more effective to have this as a mystery or even a humanoid figure like the conjuring. This is where alot of possesion films lose there way in my opinion. A tie in at the end was good and effectively left the door open for Annabelle 2, i hope this doesnt happen but we all know how the movie industry works.