Teslagrad makes it’s debut on Nintendo consoles along with the posting of the classic platformer Adventure Island. 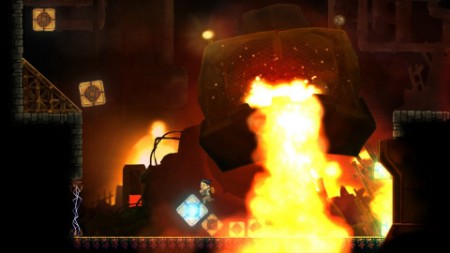 I always felt like Adventure Island got kind of a raw deal as far as platformers went in the golden age of consoles. You can definitely make a solid case for why it should have considering how many gems were around in those days, but Master Higgins and his barefoot, island hopping, jaunts never really captured my friends attention. They were all way too wrapped up in Super Mario and the like to even glance the chubby little explorer’s way, but I always had a great time with these games and so it’s pretty cool to see the original hit the Virtual Console for the Wii U.

Moving forward a few decades, this week also see the arrival of Teslagrad on the Wii U. Filled with puzzles, Teslagrad almost straddles the line between platformer and puzzler. From the critical response it’s gotten on the PC, it seems to be doing both quite well too.

Aside from all the platforming this week, Nintendo still has their Super Smashing Sale going on. That one is set to introduce you to some of the better known Super Smash Bros competitors’ games before that fighter actually hits, but at a discounted price. If you missed out on any of these all-time greats, this’d be as good a time as any to pick a few up.

Jason's been knee deep in videogames since he was but a lad. Cutting his teeth on the pixely glory that was the Atari 2600, he's been hack'n'slashing and shoot'em'uping ever since. Mainly an FPS and action guy, Jason enjoys the occasional well crafted title from every genre.
@jason_tas
Previous Bring in the clones with the new Styx: Master of Shadows trailer
Next Trailer, screens and a release date all emerge for Grand Theft Auto V on next-gen