Azure Striker Gunvolt evokes nostalgia, but unfortunately doesn’t manage to accomplish much more than that. The game manages to just be an okay experience overall.

Nostalgia is a rather powerful selling point at times, influencing people to purchase certain products in droves. From classic drinks like Coca Cola, to classic video games like Megaman, you can’t deny that there’s an element of nostalgia involved. However, what helps make these products so satisfying in the end is their quality; while Gunvolt is serviceable, it really isn’t a very enjoyable game to play. There doesn’t appear to be any significant consequence to making mistakes, the only drawback is a lower score or failing to meet specific challenges that reward you with prizes.

Gunvolt feels nostalgic, in fact one can argue that is its major asset, drawing appeal from the legacy of titles such as Megaman. The game practically screams Megaman X, the dash and wall jump mechanics are reminiscent of the series, even Gunvolt himself seems like a human version of X. There’s an intro stage, just as there would be in any Megaman X game, and after completing that level you can play stages in any order you like. There are even faces of bosses in front of every level, and a briefing that you have the option of listening to.

Gunvolt’s story is pretty cryptic at times, the characters will throw around multitudinous names like “adept” and “muse” without elaborating much them; you tend to lose interest rather quickly and just want to jump into the action. An action oriented game’s story isn’t all that important, but when there’s a wealth of dialogue, a little more clarification is needed in order to keep the audience engaged. To summarize this story, you rescue a girl named Joule who is a “muse”, beings that can allegedly control “adepts” like Gunvolt. An evil corporation named Sumuragi wants to capture this “muse” and use her to achieve world domination.

The plot is pretty derivative of Japanese video games, the characters themselves are by and large bland. It seemed like Inti Greates wanted to breath more life into them, but couldn’t quite pull it off. Occasionally more colorful ones like Merak would crop up, in fact he was my favorite character. He was your typical lazy “gamer”, and constantly whined about having to put effort into anything. Bosses such as Merak were predominantly the fun part of this game. They were fun to face off against, each had complex patterns and their attacks were a personality in and of themselves.

The only thing that really brought them down though, was the fact that you could tank a considerable amount blows. Generally, if you get hit Gunvolt will disappear momentarily, canceling out damage; add to that, Joule’s alter ego will often rescue you after all of your health is depleted, further abating the difficulty level of this game. It kind of saps any motivation you have to try, even knowing your score would suffer. You can choose to increase the challenge by taking on missions such as “beat the level in Y amount of time”, but beyond that you can comfortably cruise through any stage. To a certain degree you can do this with bosses too. 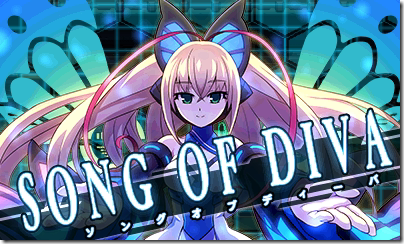 What makes the game stand out somewhat, is the tag system that was implemented. Instead of destroying foes by gunfire, you “tag” them so to speak by shooting. Your bullets do a little bit of damage, but the real heavy hitter is the lightning ability. You can create a field of electricity around you that hits various enemies at once, but if you want to do even more harm you’ll have to tag them. You can even use the field to block certain projectiles, though most can just penetrate it, causing you harm. It’s an interesting take on a run-and-gun, and feels fresh at first, but the novelty wears off quickly. It seems overpowered, as foes regularly die very quickly. That and there isn’t much risk involved in jumping in the middle of large group of baddies. As I said before you can tank hits with ease, so standing there taking the hits and tagging much of a challenge.

Sure, your score goes down, but that’s about the only way to approach any level. Speaking of levels, they all feel fairly empty and uninspired. There isn’t much to them besides the fact that they serve barren arenas to fight intermittent groups of baddies. Gunvolt has a slight dating sims aspect to it where you talk to Joule in between levels. Each time you communicate with her, a message pops up with the words “you feel a little closer to Joule”. You’re able to customize Gunvolt, managing equipment that can alter pistol fire, as well as general stats. Unless you complete a generous amount of challenges, you won’t be able to acquire the necessary items to forge new equipment. The game doesn’t auto save, so you’ll have to remember to do so whenever possible. 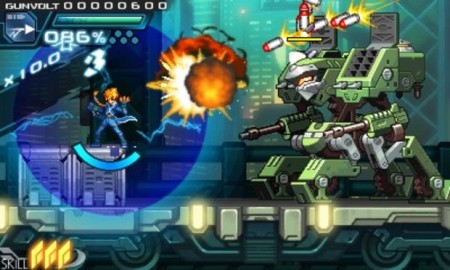 The OST is decent enough, with some jazzy tunes like the stage select music. There is a similarity between it and the Megaman X score. Gunvolt exceeds in aesthetics, the game is very pretty looking. Sprite art is superb, with smooth animation, and amazing attention to detail. From the environments, to the bosses and foes themselves, Inti Creates deserves praise for their work on the appearance of Gunvolt.

Azure Striker Gunvolt turned out to be pretty average overall. The difficulty level is very low, with score attack and mission based challenges being your only motivation. The story itself was your typical Japanese video game plot, and didn’t manage to be anything more than that. The bosses are arguably the meat and potatoes of this title, their patterns are pretty crazy and the fights can be exciting. The music is decent and the appearance of Gunvolt is amazing. You may like this more if you’re new to Megaman styled run-and-guns, but if you’re veteran of these games you should probably just stick to the classics. Ultimately, all I felt while playing Gunvolt was the desire to go back and play the Megaman X series.

Well, my name's Christopher Deleanides as you all know and I'm the Nintendo Editor here at BG. I've been playing video games since 1992, and I've been a Nintendo fan the entirety of those years. My love for video games as well as Nintendo hasn't changed, and probably never will. The only thing that comes close is politics, as I'm very deeply involved in both local and international issues.
Previous Borderlands: The Pre-Sequel Season Pass Announced
Next More Shulk in Famitsu scans