Spider-Man Noir returns in Edge of the Spider-Verse #1

The gritty, hardboiled version of Peter Parker from an alternate timeline is back as a part of Spider-Verse. Now all he’s got to do is survive Mysterio… and an insane, unstoppable Spider-killer. 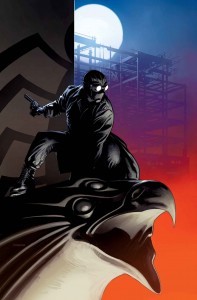 The biggest Spider-Man event in history is just around the corner as every Spider-Man from every universe unite in Spider-Verse! But first, the madness kicks off in Edge of Spider-Verse, a new 5-issue mini-series spanning multiple universes and the Spider-Men (and women) who inhabit them! Today, Marvel is proud to present your first look atEDGE OF SPIDER-VERSE #1 – showcasing the return of fan-favorite Spider-Man Noir as he crashes headlong into Spider-Verse! Writers David Hine & Fabrice Sapolsky along with artist Richard Isanove return to the grit and gristle of the streets of NYC circa the 1939 for an all-new tale of the Peter Parker of that era! But a run in with Mysterio at the New York World’s Fair is the least of his worries, as the growing threat of Spider-Verselooms on the not-so-distant horizon!

“[Mysterio is] after Spider-Man’s blood – literally,” says David Hine, in an interview with Marvel.com. “And if he doesn’t get it someone very close to Peter Parker is going to die a very nasty death. Oh yeah, if he manages to survive Mysterio, he’ll be up against the greatest threat ever faced by a Spider-Man, along with – what is it? 37 other versions of Spider-Man. Spider-Man Noir will, of course, put them all in the shadow.”

From the hard-boiled streets of New York returns a classic hero of the Spider-Verse. It will take thousands of Spider-Men (and women) to battle back the coming darkness, and Spider-Man Noir is just the beginning. Don’t miss one moment of the action and prepare yourself for the biggest Spider-Man event in history this September in EDGE OF SPIDER-VERSE #1!

Plus, don’t miss out on these exciting Edge of Spider-Verse tie-in issues of your favorite ongoing series:

For more on Spider-Verse, visit Marvel.com and join in on the conversation on Twitter using #SpiderVerse.

If there’s an alternate Spider-Man as popular as Spidey 2099, it’s probably Spider-Man Noir. This grim and gritty version of the wall-crawler debuted a few years back and hasn’t shown up in the Marvel U all that much since. He’s appeared in a video game though, in Spider-Man: Shattered Dimensions, with is where I got introduced to him. If you don’t know him, you could basically think pulp heroes like The Shadow, but with the powers of Spider-Man and you’ve got the idea.

Bottom line- he’s cool and a welcome addition to the Spider-Verse event. This is probably the biggest event to hit Spider-Man titles in years (even considering Superior) and should be a real kick in the pants for fans as it features pretty much every Spider-Person (men and women) you can think of brawling for their lives against an unstoppable new enemy. How many will make it out has yet to be seen, but there are sure to be a few fatalities along the way.

Edge of the Spider-Verse #1 hits the racks on September 9th from David Hine, Fabrice Sapolsky, and Richard Isanove.

Jason's been knee deep in videogames since he was but a lad. Cutting his teeth on the pixely glory that was the Atari 2600, he's been hack'n'slashing and shoot'em'uping ever since. Mainly an FPS and action guy, Jason enjoys the occasional well crafted title from every genre.
@jason_tas
Previous More Mega Man, more Double Dragon highlight the Nintendo Download
Next Shadowgate racks up the player kills in new trailer