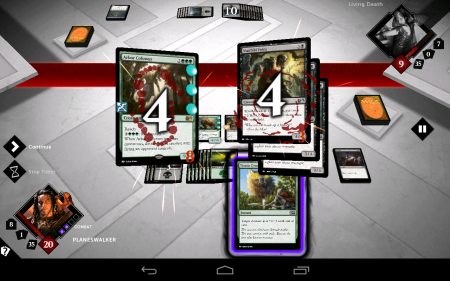 Magic (Duels of the Planeswalkers) 2015 is the latest addition into a 5 year old series of games that takes Magic: The Gathering to the video game world.  It hasn’t been very well received by the Magic community so far, and for good reason.

For those unfamiliar, Magic: The Gathering is game in which a Planeswalker (you) casts powerful spells and summons creatures to fight for you. You build a deck of 60 cards and use it to make your way through the multi-verse unharmed. With Magic 2015, you can do just that. For the first time in the series, true deck building is available. You can pick whatever cards you want for your deck. But that’s where our first problem arises.

The game is $9.99. Kind of. You can either spend ten bucks, and have access to pre-constructed decks that are just absolutely terrible. OR, you can drop 40 bucks, and get immediate access to all the cards with out having to buy/unlock booster packs as you play. I chose the latter route, as I knew I would get 40 dollars worth of entertainment, but some people may be more inclined to just spend ten and unlock cards as you go along.

And you will need to unlock cards. The started decks that you receive are built around common deck ideas in Magic. These decks are useless. I tried, just for the sake of saying I did, to defeat some of the campaign bosses with these decks to no avail. If players want to progress, they will need to drop more money than the initial ten dollar purchase, or spend some serious time grinding.

This is to be expected, but it still leaves a sour taste in your mouth. Magic: The Gathering by definition is a game where you need to spend money to get the cards, so it’s not at all surprising that with the addition of true deck building comes the need to purchase the cards to deck build. It’s as true to tangible Magic as it gets.

The game also has a slow and unresponsive menu system. I mean slow, really slow. It’s not uncommon to have to wait 6 seconds after clicking something to actually go where you want to. It can be anywhere from a mild annoyance to “are you #(@&ing serious?”.

Wizards of the Coast have also made the executive decision to remove the popular 2-Headed Giant game mode from this recent iteration. While I personally never played it and don’t mind at all, it is something to keep in mind.

With all that said, it’s hard to recommend this game to everyone. Sure you have awesome and addicting deck building, but (literally) at what cost? If you can overlook this game’s shortcomings, and don’t mind getting the 40 dollar version, you will get your moneys worth and have a lot of fun. Otherwise, stick to Duels of the Planeswalkers 2014.

I’m a journalism student at Loyalist College in Ontario, Canada. As a budding journalist, I’m naturally curious. I play video games, perhaps more often than I should, and I mainly like RPG games. Not to say that I would pass up a great game based on genre alone, I just prefer the tried and true RPG. I have a love of music, video games, and the world.
Previous SDCC 2014: Activision releases Trap Team shots and screens
Next The Last Door ‘inspired’ novella and giveaway bubble up