The 25th issue will be a packed one with big talent and plenty of adventure for the two weirdest heroes in the Valiant U. 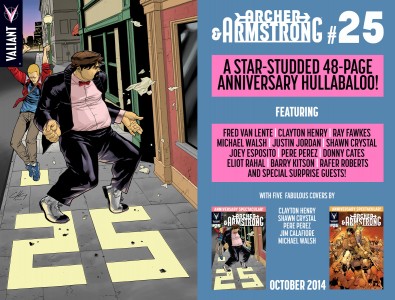 In the tradition of X-O MANOWAR #25 and HARBINGER #25…get ready for Valiant’s biggest, boldest, most over-the-top anniversary celebration yet – coming this fall!

“Since issue #1, Archer & Armstrong has been nothing short of a blast to work on, and we’ve been blessed with an incredibly gifted cast of creators along the way – Fred and Clayton, Pere Perez, Khari Evans, Emanuela Lupacchino, and David Baron, just to name a few,” said Archer & Armstrong editor Josh Johns. “Now, with issue #25 coming up, we here at Valiant wanted to build the biggest, most jam-packed milestone issue possible for the fans who have made this series a success…and finally check in on some of the long-asked questions that we planted in previous arcs. This is going to be a big one!”

For ten thousand years, the immortal currently called Armstrong has been sleeping and boozing his way across Earth, keeping one step ahead of a secret cult – known simply as the Sect – obsessed with killing him. That all changed, however, when an 18-year-old Sect assassin named Obadiah Archer turned on his masters, and joined Armstrong for a globetrotting quest to bring down the Sect’s unholy coalition of conspiracies around the world. Nazi Buddhists! Probe-happy aliens! Dead celebs! The One Percent! And even an Eternal Warrior. But Archer & Armstrong’s fight is only just beginning – and they’ll face a dire series of daft and dangerous new perils when ARCHER & ARMSTRONG #25 strikes in October!

If you haven’t delved into the world that Valiant has created in A&A, you’ve flat out been missing out on one of the most purely fun books on the shelves. These two have gotten into just about every major conspiracy you could think of and then some, and done it all with a terrific sense of humor that honestly very few comics bother with in the current industry. Simply put, it’s great; try it.

Archer & Armstrong #25, with all the bells and whistles in tow, arrives on the racks this coming October.

Jason's been knee deep in videogames since he was but a lad. Cutting his teeth on the pixely glory that was the Atari 2600, he's been hack'n'slashing and shoot'em'uping ever since. Mainly an FPS and action guy, Jason enjoys the occasional well crafted title from every genre.
@jason_tas
Previous Steam sets new user record in last night of Summer Sale
Next StepTo returns to Microsoft, to serve as Gears of War community chief