Issue 2 of the big brawl over the hidden history of the gamma bomb commences next month. 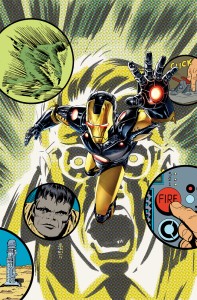 This July, the fight of the century continues in HULK VS. IRON MAN #2 – the next senses shattering issue spinning out of Original Sin! Superstar writers Mark Waid & Kieron Gillen join artist Luke Ross for a showdown that pits the Flashiest Avenger against the Smashiest Avenger. After the explosive events of last issue, ask yourself: was Tony Stark responsible for creating the Hulk? The truth behind the fateful day the Gamma Bomb exploded will at last be revealed. And the truth is going to make Hulk angry. You wouldn’t like him when he’s angry. But what secret is Hulk keeping? A secret that could give him the edge in his fight against the Invincible Iron Man? Not everyone is coming out the other side. Find out who when these two titanic Avengers clash in HULK VS. IRON MAN #2!

Flashy versus smashy huh? That’s as good a title as any for the battle that’s ensuing in the pages of the Original Sin tie-in miniseries Hulk vs Iron Man. Part two of the book launches in July and looks to continue the revelations and and amp up the hostility between two of the longest standing characters in the Marvel U.

I wonder when everyone in the Marvel Universe is going to come to the realization that Tony Stark just basically screws everyone and anyone over that he comes in contact with? Other than Hulk I mean… and Captain America. And probably Spider-Man.

Find out what happens when titans tussle in Hulk vs Iron Man #2 arrives on July 16th from Kieron Gillen and Mark Waid.

Jason's been knee deep in videogames since he was but a lad. Cutting his teeth on the pixely glory that was the Atari 2600, he's been hack'n'slashing and shoot'em'uping ever since. Mainly an FPS and action guy, Jason enjoys the occasional well crafted title from every genre.
@jason_tas
Previous Hellraid escaping onto iOS next month
Next Stronghold 3: The Campaigns storms the App Store