DST’s take on one of Marvel’s biggest characters arrives in all his wall-crawling glory. 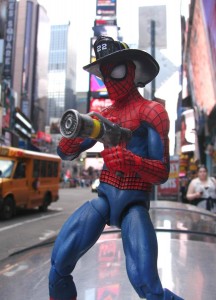 As Spidey figures go, this is a pretty all-encompasing one. Diamond has done a spectacular (ahem) job at capturing the character as he appeared in the recently released The Amazing Spider-Man 2 film, which of course is also pretty much exactly how he appears int he comics from Marvel as well.

Spider-Man sports 16 points of articulation and stands in at 7″ tall, as is the norm with the Marvel Select line. Accessories include a fireman’s helm and hose nozzle (which you recognize if you’ve seen the movie), interchangeable hands, web lines for him to swing on, and web sprays for catching crooks just like flies.

You might also recall that there’s a special ‘unmasked’ variant figure of the old web-head out now. That bad boy is up for sale on Marvelshop.com at the moment and will be making its way into Disney Stores as well as the Disney store website soon.

Jason's been knee deep in videogames since he was but a lad. Cutting his teeth on the pixely glory that was the Atari 2600, he's been hack'n'slashing and shoot'em'uping ever since. Mainly an FPS and action guy, Jason enjoys the occasional well crafted title from every genre.
@jason_tas
Previous The Nintendo Download brings Pushmo World to the Wii U
Next Call of Duty: Advanced Warfare ‘story’ trailer details a very different CoD