Stuck in the past, the Spider-Man of 2099 has one mission- try and stop the rise of Alchemax and reform his own grandfather before he can be corrupted. 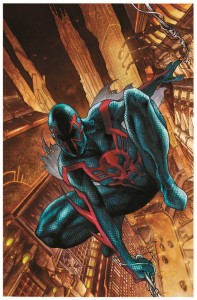 Spinning directly out of the pages of Amazing Spider-Man, Miguel O’Hara swings again as Spider-Man 2099 – only he’s trapped in the year 2014! Stranded there by his father, the evil head of super corporation Alchemax – Miguel must come to terms with being stuck in an unfamiliar and unforgiving era.

But in the year 2014, Alchemax has just formed, and Miguel has a plan. Undercover in their employ, Miguel has a chance to stop the corrupt organization before it can even get started. And perhaps even alter his own future to prevent the rise of one of his greatest villains!

“Miguel becomes determined to try and transform his grandfather, Tiberius Stone into a decent guy in the hopes that it will wind up informing the raising of Tyler Stone, and perhaps make him a better person,” says writer Peter David in an interview with Marvel.com.  “In short, he’s hoping that he can influence the development of both the present and future of Alchemax.”

“He’s going to find that’s not as easy as he’d hoped,” David continued.

You’d think that being a man out of time would make you a man without enemies, but Spider-Man 2099 is about to discover that he’s not the only one fighting for a better tomorrow. The Adjustor, a supremely powerful being has appeared in the year 2014 with only one mission – eliminate Miguel from the timestream! Not to mention the epic Spider-Verse event looming on the horizon!

Ask yourself, can one man change the future? Find out as the battle for tomorrow begins this July in SPIDER-MAN 2099 #1!

I would say that Spider-Man 2099 has always been a favorite of mine, but that’s probably not even worth mentioning since he’s been a favorite of just about all Marvel fans since the 2099 sub-brand debuted in 1992. When the line ran its course and was summarily canceled in 1998, Spider-Man and all the other future Marvel characters were left in limbo with the publisher.

Fast forward to a few one-shots and a pair of video game appearances later and we’ve got Miguel smack dab in the middle of the Marvel Universe’s present. This juxtaposition is pretty awesome for a number of reasons, not the least of which is that we just get more Miguel-Spidey adventures, which is always a good thing.

Putting the character up against his own family (albeit in the past) is a great idea for a plot too and the rise of Alchemax, which has been nonexistent in the current Marvel timeline, is a cool foreshadowing of the future events as shown way back in the ’90s. Any way you slice it, it’s just nice to have Spider-Man 2099 back on the racks, let’s hope he sticks around a little longer this time.

Catch Spider-Man 2099 #1 when it hits stores this July the 9th from the team of Peter David and Will Sliney.

Jason's been knee deep in videogames since he was but a lad. Cutting his teeth on the pixely glory that was the Atari 2600, he's been hack'n'slashing and shoot'em'uping ever since. Mainly an FPS and action guy, Jason enjoys the occasional well crafted title from every genre.
@jason_tas
Previous Nintendo’s Reggie Fils-Aime says Wii U vying for first place in the console war
Next Capcom open to company takeover