The majority of E3 was dominated by first person shooters like Call Of Duty Advanced Warfare and Tom Clancy’s The Division but many were taken back by the psychedelic art style that Entwined showed off. Sony put a lot of attention on Entwined due to it’s early place in the conference and obviously have huge hopes for the game and the studio. Entwined was developed by six students that have been recruited by the new Sony studio, PixelOpus.

Entwined was developed to be played co-operatively, with two players guiding two lost souls’ through a vibrant world until they reach the main goal of reunifying them. PixelOpus’ new title is currently available on the PS4 via the PlayStation store and will release on the PS3 and Vita later this year on a cross buy deal. 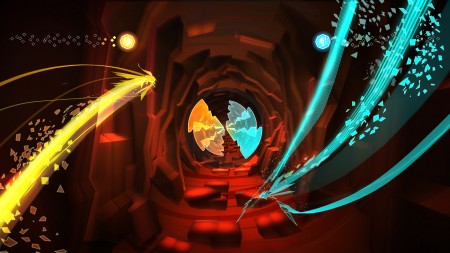 Trophies – Entwined has 11 Bronze, 2 Silver and 1 Gold and shouldn’t take longer that 5 hours to gain all the trophies.

I don't know who you are. I don't know what you want. If you are looking for ransom, I can tell you I don't have bells. But what I do have are a very particular set of golden tools, golden tools that I have acquired over a very long career. Golden tools that make me a nightmare for people like you. If you give me back my golden roses now, that'll be the end of it. I will not look for you, I will not pursue you. But if you don't, I will look for you, I will find you, and I will kill you.
Previous E3 2014: Super Smash Bros Wii U and 3DS impressions
Next E3:2014 Let It Die Revealed As PS4 Exclusive