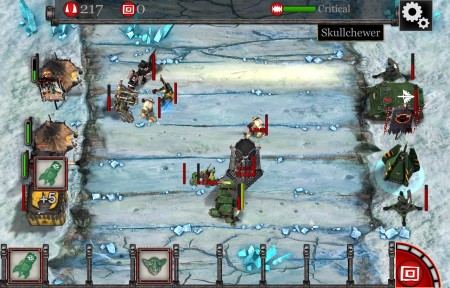 I am not a tower defense fan by any stretch of the imagination. Of course, if you had read my preview of this very game, then you already know that. Now don’t get me wrong, I have played tower defense games in the past. I even played Plants vs Zombies when it first came out just to see what it was like. Long story short; I don’t think it’s really the genre for me. I always have ended up feeling like tower defense games were a waste to be perfectly honest. There’s almost never any real story to play through, not one that’s engaging at any rate, the game mechanics are limiting, and there’s generally not all that much to do.

Well, enter Storm of Vengeance and I think I’m becoming a fan. Eutechnyx’ take on the genre actually has me rethinking the whole thing as they’ve done a decent amount with the relatively simple gameplay, and it makes for one entertaining experience that can easily suck away hours of your life.

The story (and yes, there is one) centers on a group of Space Marines called the Dark Angles, and their battle against an army of invading Orks. It’s certainly not the deepest of story lines in any way, but it’s decent enough and actually tells the player a good deal about the universe and the characters that inhabit it. Don’t expect any fully animated cut-scenes though, as Storm of Vengeance has only still pictures and text making up the narrative. It’s actually kind of fun in an old school way, though I do imagine that those out there who demand a game with all the modern trappings might not dig the presentation.

As for the game itself, that’s done pretty dang well. The graphics aren’t the most colorful in the world (this is Warhammer remember?), but they get the job done and the characters are all pretty cool looking. You’ll get to field Marines of several shapes and sizes, motorbikes, jump troops, and more in your fight against the Orkish invaders, who also have their own cadre of fighters.

Combat takes place in the traditional ‘lane’ style found in games that mix the tower defense genre up a bit, and features a set of five lanes down which your solderers will march. At the end of each lane is one enemy structure, which is your goal. On the player’s side, it’s up to you what to build. Comms Towers are a must as they collect something called ‘Redemption’ that serves as the game’s currency system, which you’ll want a lot of.

You can also build barracks’ though, and some staple 40k vehicles which also can churn out soldiers for you to send down the lanes. Not every character that you might want to see in the game is available in the base product though as characters like Terminators and Dreadnoughts are only available as paid DLC. I should point out though, that as cool as these add-ons are, they aren’t necessary to beat the campaign. They do kind of add something if you’re a longtime fan though and it’s a little disappointing that they’re not available in the actual game.

The control system couldn’t really be easier in Storm of Vengeance. Just a few clicks here and there can issue orders and build new units to reinforce your troop count, which in turn vastly increases your chances of actually making it to the other end of the field and stomping out the Orks.

This starts out as a pretty easy task and gets increasingly more difficult as the game progresses as you might expect. And although there’s a definite tower defense vibe at play, you will need to be able to get your troops ready and marching on the fly as the Orks will be doing the same and if they spend too long hacking away at one of your structures, you can kiss it goodbye. In this way, there’s a decent amount of strategy to work with in the game too, which is great in an otherwise simple game like this.

There’s a surprising amount of stuff going on in Warhammer 40k: Storm of Vengeance. If you’re a tower defense fan, then you’re going to find something familiar here; likewise, if you like a more action oriented play experience, you’ll probably find this game can keep you occupied as well.

I’m sure that the Warhammer 40k coat of paint helped with keeping my interest in Storm of Vengeance, as I still can’t really see myself as much of a tower defense or ‘lane strategy’ guy, but I actually enjoyed myself quite a bit with this one. And however you slice it, that’s something that I really wouldn’t have expected.

Jason's been knee deep in videogames since he was but a lad. Cutting his teeth on the pixely glory that was the Atari 2600, he's been hack'n'slashing and shoot'em'uping ever since. Mainly an FPS and action guy, Jason enjoys the occasional well crafted title from every genre.
@jason_tas
Previous Bizarre new horrors await Edward Grey in Witchfinder: The Mysteries of Unland
Next Darque-ness returns in Shadowman: End Times #2