Actually, make that a series of tabletop games as the publisher is set to deliver a whole banquet of CHEW titles. 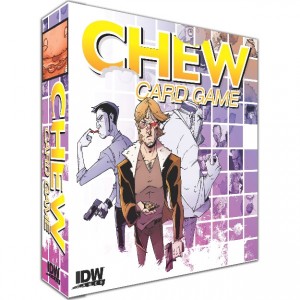 “I love working with IDW. I love the people there, and am always in awe of their commitment to quality,” says CHEWcreator John Layman. “We’re gonna do everything we can to make the CHEW game every bit as awesome as the rest of IDW’s stuff. I’m excited and grateful for this opportunity, and Rob [Guillory] and I are going to be deeply involved in this thing– every step of the way!”

“IDW has always loved working with John Layman and Rob Guillory,” says IDW’s Director of Business Development Jerry Bennington. “CHEW has grown into an amazing project, and we’re excited to bring it to the fans in a brand-new way. We’re looking forward to putting Tony Chu in all kinds of bad positions, and letting fans step in to save the day.”

And there will be a multitude of ‘bad positions’ as there will be a whole bunch of games to play featuring Mr. Chu. IDW promises everything from board to card to dice games with each one being a “stand-alone” title and capable of being an experience unto itself- so we’re not talking a series of interconnected titles here.

For their part in things, series creators Layman and Guillory will be remaining on hand throughout development of the games to keep things in line with what fans of the comic would expect from a related product.

You can expect to see Chew-branded titles to start showing up and taking a bite out of retail sometime next year.

Jason's been knee deep in videogames since he was but a lad. Cutting his teeth on the pixely glory that was the Atari 2600, he's been hack'n'slashing and shoot'em'uping ever since. Mainly an FPS and action guy, Jason enjoys the occasional well crafted title from every genre.
@jason_tas
Previous New screens of Space Hulk: Deathwing emerge from the warp
Next Divine Wonders Humble Bundle brings the best of Divinity and Age of Wonders for cheap