Rude, crude, immature, offensive, and vulgar are just a few choice words for describing Ubisoft’s and Obsidian’s newest RPG, South Park: The Stick of Truth. But let’s be honest: would we expect anything less from show creators Matt Stone and Trey Parker?

The answer of course, is absolutely not! South Park has been known to push the boundaries of what is accepted on television, and has occasionally crossed that line. Stick of Truth doesn’t worry about so-called “boundaries” though. One minute you’re beating up kids who are dressed as mythical elves, the next you’re beating on zombies dressed as Nazis. But who doesn’t enjoy pounding the gosh-darned heck out of Nazi zombies, right?

The game starts with a new kid whose family has moved to South Park for a fresh start. Mysterious circumstances surround this new kid, made obvious by his parents questions. You, the player, are in control of this new kid.

You have the ability to create him in a multitude of ways, including tops, bottoms, hair, hair color, and facial marks like freckles and birth marks. You are also able to pick one out of four classes: Warrior, Mage, Thief, or Jew. Each class has their strengths and weaknesses, but it really doesn’t matter late in the game. The creation of your character is, unfortunately, the most decision-making you will have in the entire game. 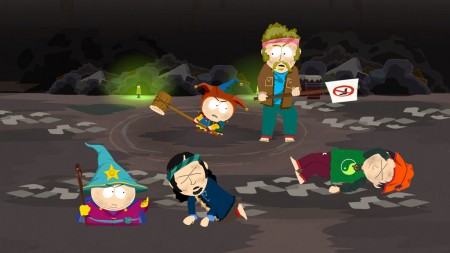 Once created, your character is free to explore South Park. Your adventure takes place in the entire town, and many familiar locales (if you do watch the show) are the center-point of many quests, both main and optional. More than a few of the side-quests last the majority of the game too, because not every area is accessible without special abilities. You gain these abilities by playing through the main quest-line. The map is quite large, but fortunately there are fast-travel flags spread throughout South Park; twelve in all.

As the story progresses, your character is joined by familiar faces. Butters is the first companion available, and is quite powerful to start, surprisingly. There are six companions available in total; however, only one companion may accompany you at any given time. You are allowed to switch out any available companion whenever you want though, even during battle! Each companion has their own unique class and abilities too- for example, Butters is a Paladin. He uses a Mighty Hammer that does bonus damage on certain enemies and can can also heal the new kid each turn, and still be able to attack.

South Park: The Stick of Truth is a relatively easy game. Playing on the hardest difficulty seems to be the equivalent of playing on the normal difficulty in most other, similar games. Items, such as healing or power “potions”, may be used each turn and using any item does not cost a turn. Meaning that an attack is still allowed to happen after any use of any item.

Battles are in the classic turn-based style, where each character attacks in turns. This doesn’t mean that you’re stuck waiting for your opponent to make his move though as, later in the game, I was able to beat two enemies without either one of them having a chance to attack. The game provides you with a wide array of weaponry and armor as well, most depending on which class you choose. I had first chosen Warrior, which may be the easiest of the four to play. The weapons and armor available depend on your character’s level too, and the max level in this game is fifteen, which can be reached well before the end credits. 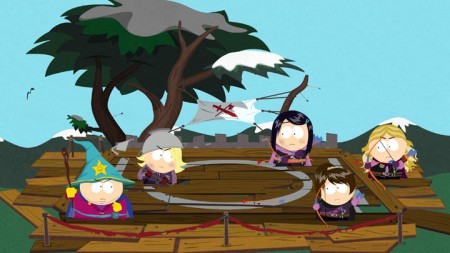 Although The Stick of Truth is relatively easy compared to most games of the genre, it’s incredibly fun and exciting to play through. Being familiar with the show makes the experience even better, what with many references to certain episodes. The quality of the video makes the game look just like a South Park episode, complete with the way characters walk and run.

It’s honestly very easy to forget that you’re playing a video game instead of watching a multi-part episode of South Park. The background music is constantly playing as you explores well, setting the tone. However, it’s not the typical music from the actual show.

The score definitely reminded me of the Elder Scrolls and the music does change depending on the situation. Battles have more intense music, while each place of business has their own unique sound. Most houses that can be explored have a TV playing episodes of “Terrence and Philip”, the popular show within the show. Unfortunately, one of the only blemishes is that dialogue can be somewhat repetitive, especially your companion’s comments during battle.

Overall, The Stick of Truth is a great game for fans of South Park. It stays true to the formula of the series throughout, and can cause you to want to re-watch certain episodes over and over again.

Although labeled as an RPG, there are very few choices you have to make throughout the game. And even when you must make a rather big decision, in the end, even that doesn’t really matter.

My experience with the game was filled with laughter three-quarters of the time, and hilarious disgust the other quarter. Although the story doesn’t change, it is worth replaying as a different class, and being able to use different types of weapons and armor. Although there are a few flaws with the game, overall it was an incredibly fun experience, and I enjoyed every minute that I got to spend exploring and helping the good folk of South Park.

I am 24 years old. I work a full time job at a frozen pizza factory as a backup supervisor. My free time is mostly spent playing video games or playing soccer for fun during the summer. I'm really into history, especially early to mid-American history.
Previous Warhammer 40k: Carnage smashes into iOS platforms today
Next Creative Assembly builds its cast for Alien: Isolation