If you’re a Marvel fan, these are going to be hard to pass up. Diamond Select Toys has an awesome series of Marvel figures on the way that pay homage to that classic toy line from the 1970’s- Mego’s World’s Greatest Super-Heroes. 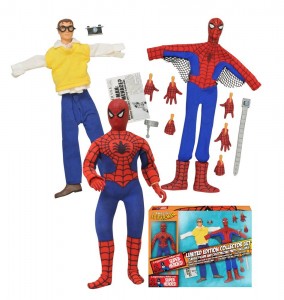 A line of action figures (or dolls, if you prefer) that pretty much everyone who was around at the time and a fan of comic books has some awesome memories of, Mego’s series of comic book figures was a glorious thing indeed. Not only was the series loaded with articulation and real cloth costumes, but there were heroes from both the Marvel and DC universes included, a feat that’s not been completed by any toy company since.

And while the new line announced by DST won’t include DC comics characters, it does have Marvel’s biggest and brightest- and man does it look awesome. Starting out with the Amazing Spider-Man himself, the first few figures in the series will include Wolverine, Captain America, and Iron Man. All will feature the same build as those classic toys from yesteryear and will come complete with a bunch of accessories (which definitely improves on the originals) and even alternate outfits.

Spidey, as you can see in the promo shot, comes with a modern and classic costume, Peter Parker clothing, and even an alternate head of his alter ego. It’s as complete a Spider-Man figure as you’re going to find anywhere and a real dream for DST director Chuck Terceira.

“Getting the opportunity to make the Marvel toys inspired by my childhood has long been a goal of mine, and kicking the line off with my favorite Marvel hero, Spider-Man, was a no-brainer,” said DST director Chuck Terceira. “Offering extra parts and new outfits allow us to stay true to what made the toys great in the first place, while simultaneously updating the figures and making each one into a true collector’s item.”

Each figure will come packed in a ’70s era styled window box inside a “collector case” with all the extra pieces packed into a separate tray, which is also display-ready. A mini-booklet will also be in the packs, outlining the histories of the character showcased. That’s a lot of awesome for one little figure.

You’ll see each figure shipping individually (no waves of multiple figures are expected), starting in late 2014 with Spider-Man and moving forward through the already announced characters from there. Each figure in the Marvel Retro Line will run you $80.00 USD, which actually isn’t that bad at all when you consider what you’re getting. Each set will be limited to just 3,000 pieces too, so there just might be a fair amount of collector value here as well.

More as we get it.

Jason's been knee deep in videogames since he was but a lad. Cutting his teeth on the pixely glory that was the Atari 2600, he's been hack'n'slashing and shoot'em'uping ever since. Mainly an FPS and action guy, Jason enjoys the occasional well crafted title from every genre.
@jason_tas
Previous Explore the arcane features of The Incredible Adventures of Van Helsing II in the new trailer
Next The Elder Scrolls Online still in development, pushed back about 6 months