Thanos returns in his first Annual

The Mad Titan returns with a quest that’ll take him beyond death and into the clutches of Mephisto. 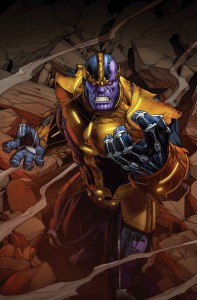 This May, Jim Starlin and Ron Lim, the legendary team that brought you The Infinity Gauntlet return for an epic untold tale of the Mad Titan like you’ve never seen him before. Today, Marvel is proud to present your very first look at THANOS ANNUAL #1! A devastating defeat in Thanos’ past has set in motion cataclysmic events that cannot be undone. Facing his ultimate demise, Thanos welcomes the afterlife, hoping to finally be united with his one true love, Death. But he was wrong. There is no love waiting for him in the beyond. Only pain and malice at the hands of Mephisto!

And Mephisto is not alone. He brings with him a mysterious being with deep ties to the Mad Titan. A mysterious being who will take Thanos on an unparalleled journey through space and time reliving his greatest triumphs and his most crushing defeats. Now, Thanos must face down Mephisto, the Avengers and even his future self to prepare for what comes next! And seeds sown here bear bitter fruit in August’s highly anticipated Thanos: The Infinity Revelation original graphic novel! As the Titan prepares for his greatest battle, no fan can afford to miss THANOS ANNUAL #1 this May!

Long a favorite of mine personally, it’s retry awesome that Thanos is getting the kind of attention that he is in the Marvel U as of late. Fresh off the Infinity crossover event and now with an Annual, the soon to be movie star (maybe) with the purple complexion is absolutely blowing up in a way that he hasn’t since the Infinity Gauntlet.

Here in the Thanos Annual #1 he’s entered into the afterlife and straight into the hands of Mephisto. The classic Marvel villain has played opposite to the FF, the Avengers, and others (including the Silver Surfer), but I can’t remember a time where he faced down Thanos of Titan so this should be a fun one just from that aspect.

After the Annual, which hits on the 28th of this month, remember to look for that Thanos: The Infinity Revelation original graphic novel (so happy those are back too) in August.

Jason's been knee deep in videogames since he was but a lad. Cutting his teeth on the pixely glory that was the Atari 2600, he's been hack'n'slashing and shoot'em'uping ever since. Mainly an FPS and action guy, Jason enjoys the occasional well crafted title from every genre.
@jason_tas
Previous Valiant Universe RPG quick-start rules released
Next Dark Horse Presents Volume 3 dated for this August