Batman: Arkham Origins Blackgate out now on PC and consoles

The Deluxe Edition of Warner Bros Interactive Entertainment’s excellent metroidvania-styled Batman adventure is now available on consoles and the PC. 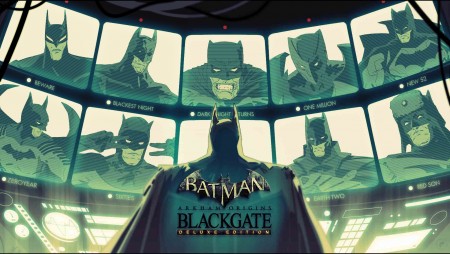 So you officially have no excuse not to play WBIE’s Batman: Arkham prequel now. As of today the game, which we had all kinds of fun with on the PS Vita, is now available on the Xbox 360, PS3, PC, and Wii U as a Deluxe Edition.

Basically, the ‘deluxe’ tag means you’ll be getting a fair bit more content than the game contained when it bowed in on the Vita and 3DS last year. Included in the download is the same base game with 2.5D graphics and 5.1 surround sound, but also a brand new navigation system exclusive to the console and PC version.

There’s also an exclusive Zero Year bat suit just waiting for you to download and wear to your next criminal engagement. All you need to do to grab the new costume for the Dark Knight is link your WBID account to the game on the platform opt your choice and you’re in business. Considering that Arkham Origins Blackgate – Deluxe Edition is a prequel to the Arkham series, the Zero Year suit (designed by artist Greg Capullo) is a pretty awesome touch since the costume is currently featured in the prequel story that’s running through the Batman comics (a pretty awesome story by the way).

Jason's been knee deep in videogames since he was but a lad. Cutting his teeth on the pixely glory that was the Atari 2600, he's been hack'n'slashing and shoot'em'uping ever since. Mainly an FPS and action guy, Jason enjoys the occasional well crafted title from every genre.
@jason_tas
Previous Bundle Stars offers new Kalypso Bundle with 10 games for $3.99
Next The Wolf Among Us episode 3 wolfs out in new trailer