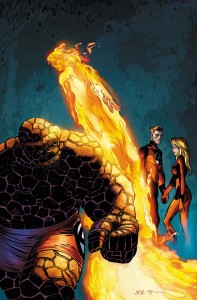 The fall of the Marvel Universe’s first family continues this April in FANTASTIC FOUR #3 – from the explosive creative team of James Robinson and Leonard Kirk! The Fantastic Four have saved Manhattan from an inter-dimensional invasion – but the cost was severe. What was once a team of four has been reduced to three. Is this the end of the Human Torch? Plus – don’t miss the introduction of a stronger, even deadlier WRECKING CREW! But with the team down one member, will the Fantastic Four be strong enough to stop them? Fans will not want to miss FANTASTIC FOUR #3 this April!

The breakdown of the Fantastic Four continues in the new monthly for Marvel’s First Family with the potential loss of the Human Torch. While I don’t think for a second that this is it for Johnny Storm, it is interesting to see the team down by one of their iconic members and now have to deal with the repercussions of that while, at the same time, being met face to face with an all-new Wrecking Crew.

Speaking of the bad guy group, they’re a fan favorite all their own and it’s super cool to see them remained as even bigger and badder in this new series. I continue to love the outfits too; the red and black is striking and looks great and modern, but still keeps the classic look of one of the comic world’s best known and oldest superhero teams.

See what happens without old matchstick as the FF F3 take on the Wrecking Crew in Fantastic Four (might have to change that name) #3 when it hits the racks on April 23rd from the team of James Robinson and Leonard Kirk.

Jason's been knee deep in videogames since he was but a lad. Cutting his teeth on the pixely glory that was the Atari 2600, he's been hack'n'slashing and shoot'em'uping ever since. Mainly an FPS and action guy, Jason enjoys the occasional well crafted title from every genre.
@jason_tas
Previous Animation and AI play a big role in Techland’s Hellraid
Next Pigs playing video games better than a 3 year old child? Believe it