The jade giant lies nearly dead after the events of the final issue of Indestructible Hulk. What a way to kick off a new series! 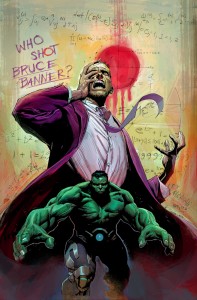 This April, the Jade Giant returns for an all-new ongoing series from Eisner Award winning writer Mark Waid and critically acclaimed artist Mark Bagley! Now is the perfect chance to jump on board as the epic “Banner D.O.A” begins in HULK #1!

Following the shocking ending of Indestructible Hulk – Bruce Banner lay at inches from death. As he clings to life, the mystery of his attacker will have everyone talking. Who shot Bruce Banner? And why did they want him dead?

“As our series opens, Banner’s at death’s door”, says Waid. “…having learned something about himself that cuts him to the quick and calls into question everything he’s been doing for what he believes is the public good.  And things don’t improve for him from there.”

Did his unknown attacker want Banner dead? Or the Hulk? One thing is for certain – if he survives, it won’t be as the same Bruce Banner we’ve known! And as the mystery deepens, everything you thought you knew about the Hulk will change!

How will the Green Goliath solve the mystery of his enigmatic attacker? How can he? Don’t miss a single moment as the explosive new series kicks off with a gamma bomb sized revelation this April in HULK #1!

Asking who shot Banner is kind of a loaded question isn’t it? I mean, he’s not really that well liked and doesn’t nearly half the Marvel U want him dead for something? I am pretty anxious to see this ‘new light’ that the little brainiac is supposed to be seen in though, and I’m hoping it’s something akin to the classic Bruce.

I always liked the nomadic scientist who wasn’t really all that sure of himself or his powers as the Hulk. He was relatable, while still being super-human and a monster that nobody wanted to tangle with at the end of the day. The current Banner, who’s something of an egomaniac, isn’t nearly as interesting or as deep of a character. Just my opinion and I have no idea where Marvel and series writer Mark Waid are actually going with this, but we shall see in relatively short order.

Hulk #1 (I can’t tell you how happy I am that there’s no ‘All-New’ in front of that by the way) is set to stomp all over retail shelves and the Marvel App on April 16th from the impressive team of Waid and Mark Bagley. Oh, and do yourself a favor and click through the gallery below- that Donkey Kong variant is just all kinds of awesome.

Jason's been knee deep in videogames since he was but a lad. Cutting his teeth on the pixely glory that was the Atari 2600, he's been hack'n'slashing and shoot'em'uping ever since. Mainly an FPS and action guy, Jason enjoys the occasional well crafted title from every genre.
@jason_tas
Previous The Theocrat preaches to Age of Wonders III
Next Dungeon Defenders goes free as part of Xbox Games with Gold