Magneto continues his war against those who would threaten Mutant-kind, which might include S.H.I.E.L.D. 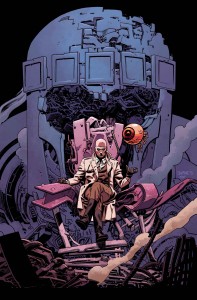 This April, the war for mutantkind’s survival continues in MAGNETO #2–from the blockbuster creative team of Cullen Bunn and Gabriel Hernandez Walta! Hunting down threats to mutants before they strike, Magneto isn’t afraid to get his hands bloody to safeguard his species. But no one escapes their past–especially one with as many skeletons as Magneto. Long-dormant horrors have resurfaced, and they pose a serious danger to the future of mutantkind. What horrible secrets are being brought to bear? Plus, S.H.I.E.L.D. gets wind of Magneto’s activities and they’re going to do something about it! And it all happens this April in MAGNETO #2!

It’s nice to see Magnus getting back to his ‘roots’, such as they are. Being the bad guy is something that the character was created to be and I really don’t dig Magneto as the hero at all.

Here though, we get to see him as a kind of anti-hero, which is a little more fitting for the mutant master of magnetism. The book is only one issue in and we’re already getting to see him tackling S.H.I.E.L.D. after all, not something that’s all that heroic. While I don;t really want to see him as a ‘hero’ per say, I don’t think I’m alone in thinking that shades of grey and a little moral ambiguity are just fine.

A great villain is, after all, someone who an audience can almost relate to and definitely understand- even if they don’t completely agree with. See what you think when Magneto #2 arrives on the racks next month.

Jason's been knee deep in videogames since he was but a lad. Cutting his teeth on the pixely glory that was the Atari 2600, he's been hack'n'slashing and shoot'em'uping ever since. Mainly an FPS and action guy, Jason enjoys the occasional well crafted title from every genre.
@jason_tas
Previous Special Feature: 2013 Brutal Gamer Awards part 1 (of 3)
Next The Walking Dead ‘A House Divided’ soundtrack released