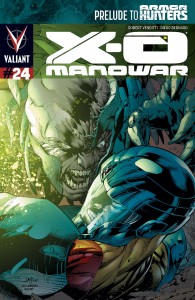 Aric of Dacia, a fifth-century warrior bonded to alien armor and transplanted to the modern day, is now the most important weapon in the arsenal of M.E.R.O., the top-secret American intelligence organization that monitors extraterrestrial life on Earth. In order to protect his people, Aric must undergo dangerous missions in space, but nothing can prepare him for the stunning secret that awaits him in the stars.

Who – or what – is the man called Malgam? Find out here on April 16th as the march toward X-O Manowar #25 – and the coming of the ARMOR HUNTERS – continues with a can’t–miss introduction to this summer’s biggest and most brutal comic book event right here X-O Manowar #24!

This summer, Earth will be the greatest hunt of all… ARMOR HUNTERS is coming!

As a tease for the upcoming mini-series (Armor Hunters), this is a pretty good one. Aric on his heels is something that you don’t see too often in any book (even when he’s up against it), but here’s Malgam taking the fight right to him. I like the design on the new character too and the shattered armor he’s wearing (which looks awfully similar to the X-O suit) is very interesting from the standpoint of a fan.

Aric just keeps on going from one crisis to the next, and Armor Hunters should be a ripper. Catch the first hint of what’s to come when X-O Manowar #24 hits the racks on April 16th from the team of Robert Venditti and Diego Bernard.

Jason's been knee deep in videogames since he was but a lad. Cutting his teeth on the pixely glory that was the Atari 2600, he's been hack'n'slashing and shoot'em'uping ever since. Mainly an FPS and action guy, Jason enjoys the occasional well crafted title from every genre.
@jason_tas
Previous SXSW: Tales from the Borderlands gets a lot more detailed
Next New skins run amok in Call of Duty: Ghosts