The details of Atlus and Zombie Studios’ first-person horror title Daylight are starting to filter in.

Firstly, Atlus revealed two of the game’s newest areas, the Forest and the Prison with a couple of new spooktacular screens. I like the creepy doll, that’s a nice touch. 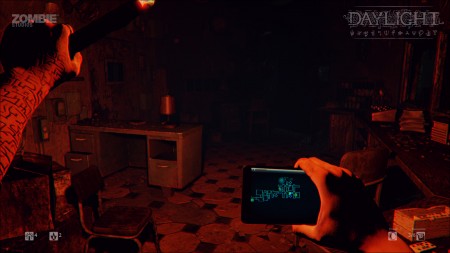 The Prison:
The Prison area unlocks after players find their way out of Dr. Mercer’s office. The hospital doors are replaced with iron bars, nurses’ stations replaced with guard checkpoints, and the prison is punctuated with a lurking 3-story stack of prison cells. Remnants players will find in this area are notes from prisoners to each other, guard logs about various altercations, and even a few cover-ups of impropriety. The spirits players begin to encounter in the prison are the first ones in the game that start to get aggressive. Staying safe in the prisons will require being able to quickly and efficiently navigate the prison block, but the tight corridors and guard rooms will put players to the test. 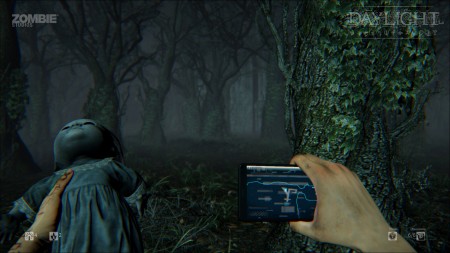 The Forest:
One of the later levels in Daylight is the Forest. After players traverse through the Prison and the Sewers, they will find themselves outdoors in a big open area, lit only by the trusty mobile phone light and the faint glow of a sallow moon. Despite being a giant open area of scrub land and swamps, the Forest still has the same procedurally generated environments as the rest of Daylight. Several notable landmarks will be randomly generated in the open world. The random landmarks will also contain the location of the remnants to find, but only the bravest players will live long enough to see what kind of horrors the forest holds (the shack full of nooses is a personal favorite of mine).

Aside from the two new areas, Atlus also revealed a few little tidbits about some of the cooler periphery features of Daylight. The game will support RealD 3D right from launch on both the PS4 and PC, which should raise the scary levels of Daylight quite a bit. If you’re unaware, RealD 3D is actually the same tech used by major motion picture houses to run big budget 3D movies. 3D in games kind of exploded for a while there and then just sort of faded into nothingness, so to see it played up is a rarity these days too, though one that’s very fitting considering the game we’re talking about here.

Also very cool is that the PS4’s ‘share’ button is going to be used to fantastic effect if Zombie Studios can pull this next feature off. The dev team is currently working on something that’d let gamers watching a Twitch feed of someone playing actually mess with that player’s game.

This feature would also work on the PC and would happen by simply typing words into the chat window on the streaming service, in order to cue game-world events and noises. The example given was that someone could type in ‘meow’ and a random cat noise would play, hopefully scaring the gamer and getting a good laugh for the viewers. Two things here; Atlus isn’t revealing the interactive word list (so you’re just going to have to play around) and you’re unable to spam the same word over and over since each one will be on a timer. Makes sense.

And finally, here comes that release date- Daylight will be on digital shelves for both the PS4 and the PC on April 8th and will run you $14.99 USD. There will also be some kind of preorder incentive coming along for it, so keep your phone charged and stay tuned for that too.

Jason's been knee deep in videogames since he was but a lad. Cutting his teeth on the pixely glory that was the Atari 2600, he's been hack'n'slashing and shoot'em'uping ever since. Mainly an FPS and action guy, Jason enjoys the occasional well crafted title from every genre.
@jason_tas
Previous Castlevania: Lords of Shadow takes its final bow this week
Next TMNT creators back on board for 30th anniversary special