The Man Without Fear closes one chapter in his life before starting a brand new one. 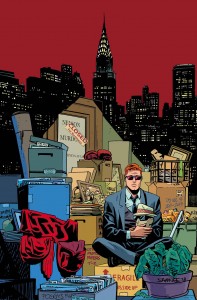 This February – Matt Murdock’s life comes crashing down in DAREDEVIL #36 – the fearless final issue from critically acclaimed storytellers Mark Waid & Chris Samnee! After the shocking events of last issue, there’s nowhere left for Matt to run. The Man Without Fear stands alone against the villainous hate group known as Sons of the Serpent. And their climactic clash is about to take place on a different kind of battlefield – in a New York City courtroom! But how much is he willing to sacrifice in the name of victory? It’s time for the Man Without Fear to show how fearless he really is. And the truth may shock you! It’s all been leading to this – and the seeds sown here bear bitter fruit for Daredevil in 2014! You don’t need a radar sense to know this one will be big! Don’t miss the epic finale this February in DAREDEVIL #36!

So although this is the final issue of Daredevil’s first run in the Marvel NOW era, we all know that this isn’t the end for the character- far from it. Matty will actually be heading out to the West Coast for the start of his all-new series (also titled Daredevil) which kicks off in April. So don’t despair ‘devil fans, more Matt Murdock is on the way.

As for this issue, there’s been a ton of tongue-in-cheekery about Matt’s dual identity of lawyer by day and Daredevil by night. I’m not sure if Marvel would make the character’s identity public per say, a’la Tony Stark, but it does seem like it might be a viable guess as to where they’re going with this one. That might be especially true considering that he’s leaving the shores of NYC and being transplanted to San Francisco. Could it be for more than just a change of scenery?

All will be revealed when Daredevil #36 hits the racks on February 19th from Marvel Comics and the talented team-up of Mark Waid and Chris Samnee.

Jason's been knee deep in videogames since he was but a lad. Cutting his teeth on the pixely glory that was the Atari 2600, he's been hack'n'slashing and shoot'em'uping ever since. Mainly an FPS and action guy, Jason enjoys the occasional well crafted title from every genre.
@jason_tas
Previous The Amazing Spider-Man 2 trailer debuts, reveals Kraven the hunter
Next Van Helsing II reveals the Chimera