The Kree have discovered a way to weaponize Norse Gods and it’s up to the Invaders to stop ’em! …wait, what? 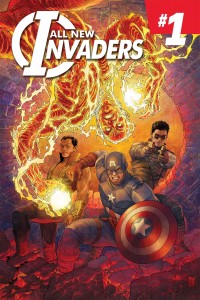 This January, All-New Marvel NOW! heads to the battlefront, and today Marvel is pleased to present your first look at ALL-NEW INVADERS #1 from Eisner Award-Winning writer James Robinson and blockbuster artist Steve Pugh! In a bid to conquer the universe, the Kree Empire has discovered a way to weaponize Norse Gods. It falls to Brothers-in-arms Captain America, The Winter Soldier, Namor, and The Original Human Torch to re-band for a different kind of war. One that will force them to face the future and save the Earth from the Kree Empire.

“James Robinson and Steve Pugh have put 120% of their talents into this project,” said Senior Editor Mark Paniccia. “The end-result is an exciting superhero adventure dropping this legendary team into the current Marvel Universe at hyper drive.”

Can these timeless allies survive the deadly comic trenches? Find out as Marvel’s original mightiest heroes take to the stars for the senses shattering ALL-NEW INVADERS #1!

Oh my this is cool. Even though I have to admit that I’m completely puzzled by the idea of ‘weaponizing’ Norse Gods, the return of the Invaders in pretty much all their glory is just too awesome not to get excited about. One of Marvel’s original super-teams, the Invaders were a staple of the publisher’s WWII era universe and included not only three of the currently biggest heroes in the Marvel U, but also the original Human Torch.

An android who can ignite and basically carries many of the powers of the Fantastic Four’s Jonny Storm, this Torch hasn’t been seen in the pages of any book in a long, long time- till now. For his inclusion alone, I’m pumped to see what writer James Robinson does with Invaders. I won’t have too much longer to wait either as All-New Invaders #1 hits the stands from Robinson and artist Steve Pugh on January 22nd with alt covers provided by Mukesh Singh, John Cassaday, Skottie Young and Steve Pugh. This is a big one folks- if you’re a Marvellite from way back or just a fan of good old-fashioned super heroics, don’t miss it.

Jason's been knee deep in videogames since he was but a lad. Cutting his teeth on the pixely glory that was the Atari 2600, he's been hack'n'slashing and shoot'em'uping ever since. Mainly an FPS and action guy, Jason enjoys the occasional well crafted title from every genre.
@jason_tas
Previous Zelda returns in Super Smash Bros
Next Activision outlines Call of Duty: Ghosts Season Pass in new trailer