X-21 joins the team as they fall victim to the deadly Purifiers. But holding her and the rest of the X-Men captive might not be quite as easy as the extremists might think. 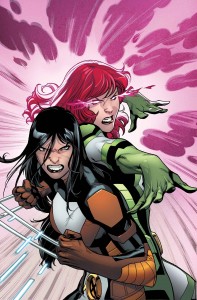 This January, the X-Men battle for their lives against the mutant-hunting Purifiers in the exciting ALL-NEW X-MEN #21 – from blockbuster creative team of Brian Michael Bendis, Brandon Peterson and legendary X-Men: God Loves, Man Kills artist Brent Anderson (back for a special flashback scene)! X-23 is back – but her first mission with her new team, after her horrific ordeal in Avengers Arena, has gone horribly. X-23 and the All-New X-Men face brutal torture at the hands of the Purifiers! Will her first mission be her last? This January, the claws come out in ALL-NEW X-MEN #21!

Yeah things haven’t been anything close to what you’d call ‘easy’ for X-23. Between Arcade and his maniacal Murder World in Avengers Arena and now joining up with the X-Men only to be imprisoned by the Purifiers, Wolverine’s young female clone has had a tough stretch.

Being related to Wolvie though, I’m going to go out on a limb and say that it’s the bad guys that are going to get caught on the short end of the claw in this one. Aside from X-23, Jean Grey, Cyclops and the rest of the team are no pushovers either- and I don’t think some chains mounted to the ceiling are going to hold them for all that long.

Did somebody say ‘snikt’? Look for All-New X-Men #21 to hit the stands on January 15th from the team of Brian Michael Bendis (is there anything that he’s not writing these days?) and artists Brandon Peterson and Brent Anderson, who’ll be contributing that awesome God Loves, Man Kills flashback sequence. It’s probably worth the price of admission just for that.

Jason's been knee deep in videogames since he was but a lad. Cutting his teeth on the pixely glory that was the Atari 2600, he's been hack'n'slashing and shoot'em'uping ever since. Mainly an FPS and action guy, Jason enjoys the occasional well crafted title from every genre.
@jason_tas
Previous Still looking for an Xbox One or PS4? Toys R Us has you covered
Next Interstellar teaser trailer released