Archer and Armstrong versus everybody- go! 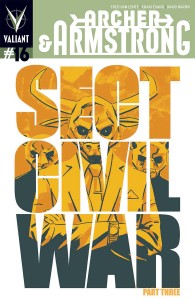 Valiant is proud to present an advance preview of Archer & Armstrong #16 by New York Times best-selling writer Fred Van Lente and Harvey Award-nominated artist Khari Evans! Sect Civil War continues! It’s a showdown on the lowdown as Archer & Armstrong regroup to capture an ancient weapon forged way back in mummy times before it falls into the hands of…well, just about every scary group of secret conspirators history has ever known.

The multiple Sects that secretly govern our world have stepped out of the shadows and right into each others’ faces! Now the newly reunited Archer and Armstrong (for now) must stand tall in this conspiracy free-for-all and find a way to not only survive, but save the world in the process (again)!

The illuminated banksters of One Percent! The masonic brothers of the Master Builders! The consecrated murder nuns of the Sisters of Perpetual Darkness! The anonymous anarchists of the Black Bloc! And more! The secret factions of Sect Civil War steamroll into their biggest battle yet right here on December 11th, only in Archer & Armstrong #16 – in stores the same day as Unity #2!

A&A is a pretty great book all by itself- plug in a bunch of ‘real world’ conspiracy groups and theories and it becomes all that much better. And as a bit of a stone-turner myself, I love the idea that all of the various groups from conspiracy lore are battling with each other to claim some ancient prize.

Of course, I also happen to be a pretty big fan of Archer & Armstrong and seeing the characters all mixed up in the proceedings is just all kinds of awesome- especially since most of this stuff never makes it into the pop-culture zeitgeist and definitely isn’t see in comic books too often.

See if the duo can get along long enough to save the world when Archer & Armstrong #16 hits stands on December 11th from the team of the excellent Fred Van Lente and artist Khari Evans.

Jason's been knee deep in videogames since he was but a lad. Cutting his teeth on the pixely glory that was the Atari 2600, he's been hack'n'slashing and shoot'em'uping ever since. Mainly an FPS and action guy, Jason enjoys the occasional well crafted title from every genre.
@jason_tas
Previous Vizio pumps up the volume with new soundbars
Next The Winter Soldier to invade Disney Stores this month