Gamers did some big time good for some of the US’ best with the 8-bit Salute to Veterans with almost $300k in games and gear donated to soldiers stationed abroad and recuperating in medical facilities. 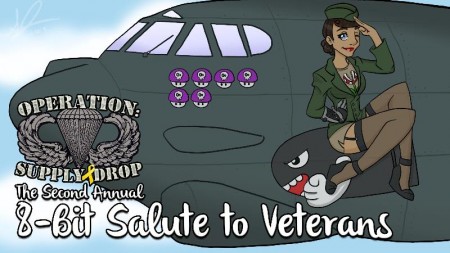 “Every year Operation Supply Drop does this, I always tell myself there’s no way we’re going to beat last year’s numbers, and that this exponential increase ever year has to come to an end…” said charity founder Stephen Machuga, “…then the event happens and we’re flooded with donations.”

We’ve been following this one for a while, but here we are the wrap up of the initiative and we’re happy to announce that Operation Supply Drop has beaten last year’s numbers. The group has posted a grand total of three-hundred thousand dollars in games and gear donated to the charity, a number that should make for some smiles on the faces of some guys and gals who could use them!

The biggest donations for 2013 came from some of the biggest names in gaming including Popcap ($100,000 of t-shirts and codes), GameStop (over $40,000 in Playstation 3 bundles and games), Zombie Studios ($25,000 of in game currency for Blacklight: Retribution), Intel ($20,000 worth of handbuilt “NUC” PC’s) and Hidden Path Entertainment ($20,000 of Steam codes for Defense Grid: The Awakening). Operation Supply Drop also tells us that they have gotten one big donation that hasn’t been tallied as of yet, so these final numbers are only going to get better.

If you’d like to make a donation (yes, you still can) or organize something to help out with the charity, click here and get all the intel you need to get started.

The movies, music and television of the '80s are Jessica's obsession. She's a fan of almost everything from the 'me decade' including (but not limited to) Barbie, Jem, She-Ra, Ms Pac-Man and neon print anything.
Previous King of Fighters ’97 dukes it out on iOS and Android
Next Marvel announces all-new Moon Knight ongoing series