The Man Without Fear returns to NYC for a showdown with The Sons of the Serpent. But when the bad guys control the whole city, taking them down might be more than the Devil can handle. 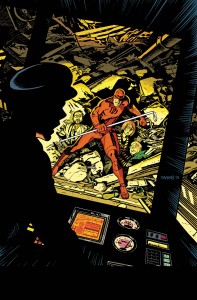 This December, Marvel’s fearless hero becomes the most wanted man in New York City in the action-packed Daredevil #34! From award-winning writer Mark Waid and acclaimed artist Javier Rodriguez – Matt Murdock has returned to a New York City that wants him dead! The Sons of the Serpent are out to take down the Man Without Fear before he can completely dismantle them! But when your enemy controls the entire city’s justice system and more, enemies are everywhere! Where can you turn when everyone is a bad guy? The odds are stacked against him this December – and that’s just the way he likes it! All leading up to the biggest life changing event for ol’ hornhead. No fan of the man without fear can afford to miss the exciting Daredevil #34!

Corruption on a city-wide level is nothing new for Matt Murdock, who’s been dealing with that pretty much his whole adult life as a lawyer- and as Daredevil. It is a little different though, for him to actually have the city out to get him… maybe he should have stayed in California.

Jason's been knee deep in videogames since he was but a lad. Cutting his teeth on the pixely glory that was the Atari 2600, he's been hack'n'slashing and shoot'em'uping ever since. Mainly an FPS and action guy, Jason enjoys the occasional well crafted title from every genre.
@jason_tas
Previous DST releases Marvel, Invincible, monsters and more this week
Next Shadowrun Returns to expand with Dragonfall