The Marvel U builds towards Inhumanity as Bruce Banner’s intellect has to take the fore when Hulk encounters a problem that even he can’t smash. 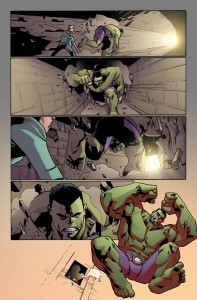 Hulk smashes, and Banner builds. But what happens when Hulk can’t smash? Marvel is proud to present your first look at Indestructible Hulk 16 – from superstar writer Mark Waid and red-hot artist Clay Mann! Earth’s scientists have a deadly problem they can’t solve, and with time running out they’ve turned to Bruce Banner for help! Now, with a problem Hulk can’t smash, it’s up to Banner’s super intellect to help build….an extremely powerful bomb?! Plus: which of Banner’s assistants will make it out of this one alive? The seeds of Inhumanity are sown this November in the explosive Indestructible Hulk #16!

Bruce Banner building bombs does’t sound like a really great idea. Hulk’s human side hasn’t been the stablest of people over the last few years and it’s not like he has a really great history with things that go ‘boom’ either. It’s interesting to see Hulk have to take the back burner for a while though.

One of my favorite things about the character(s) was always that he was the mind of Banner and the muscle of Hulk- but never at the same time. I’m happy to see Marvel playing that up again.

Indestructible Hulk #16 smashes into retail and onto the Marvel App on November 27th.

Jason's been knee deep in videogames since he was but a lad. Cutting his teeth on the pixely glory that was the Atari 2600, he's been hack'n'slashing and shoot'em'uping ever since. Mainly an FPS and action guy, Jason enjoys the occasional well crafted title from every genre.
@jason_tas
Previous Anomaly 2 now available on the App Store
Next 5 new shows debut on Nintendo Video