New wrestlers, including a bunch of classic characters and WWE Legends will be making their way into publisher 2K Games’ first entry in the long running series. The full list of what you can expect and who’ll be making their entrances after the jump. 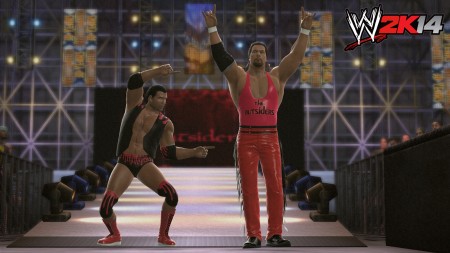 Well, first things first, NWO fans are going to be happy. The faction, which was arguably the long-defunct WCW’s greatest contribution, will be making its presence known in a big way thanks the inclusion of not only the Outsiders (Hall & Nash) but also Syxx, the Giant, Scott Steiner and Curt ‘Mr.Perfect’ Hennig. I was a big fan of both the black and white and the Wolfpack, so I’m pretty happy to hear they’ll be in ‘2K14.

Also available as DLC will be such greats of the squared-circle as Rick Rude, Bruno Sammartino, Jake ‘the snake’ Roberts and Dusty Rhodes. Still oddly absent are some of the greatest female wrestlers from the Federation though including Trish Stratus. It’s probably not all that big of a deal to most fans to be honest, it just strikes me as odd that such huge characters are left off the table for a game that’s clearly including a ton of the greats from throughout WWF/E history.

Anyway, WWE 2K14 will be on store shelves on October 29th in the US and November 1st everywhere else. The prices shown below are for the UK, but you get the idea. Here’s your breakdown of what’s coming to the game and when it’ll be available:

Players may purchase WWE 2K14 downloadable content at a reduced price point through the game’s Season Pass program. For a one-time, suggested purchase cost of £15.99 a saving of more than 25 percent versus individual content purchases, players will receive the following items:

Jason's been knee deep in videogames since he was but a lad. Cutting his teeth on the pixely glory that was the Atari 2600, he's been hack'n'slashing and shoot'em'uping ever since. Mainly an FPS and action guy, Jason enjoys the occasional well crafted title from every genre.
@jason_tas
Previous Weekend Special: The Cosplay of NYCC
Next Harbinger #17 (comics) Preview