Mutant Blobs attack the PC in a port of one of the PS Vita’s best launch titles. 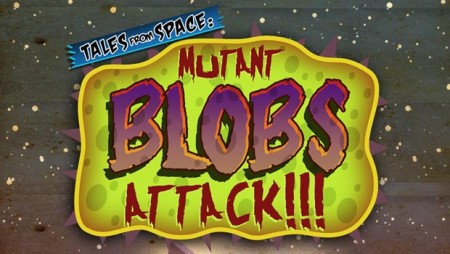 Now that we live in an era of special effects and green screens, it truly is possible for our wildest dreams to be recreated on the big screen. Sometimes these images do become something more than a simple vision, just as the recent Star Trek movies and the fantastic Avatar from James Cameron have.

Unfortunately though, there are still tons of terrible sci-fi movies out in the world. The biggest creator of these tends to be the Syfy channel who like the satanists and anarchists before it, takes no greater pleasure than destroying society as they are known for their low budget and utterly mindless films. At this point, they probably get their ideas from a See N’ Say, just slamming two animals together to get some new monster. Though they never live up to the epic proportions the directors probably would want, they do bring delight to all sorts of people.

And from these ideals are where you will get the most enjoyment from Tales From Space: Mutant Blobs Attack. Created by Drinkbox studios, who created the first Tales from Space game and the more recent and notable Guacamelee, this is a small step for platformers, yet the iteration that helped Drinkbox refine their skills. 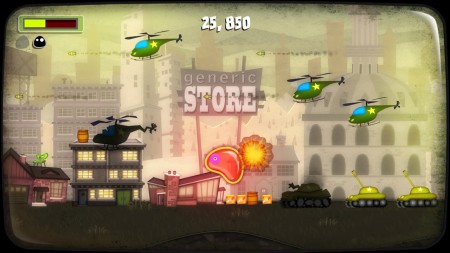 The story is the campy yet interesting tale we have heard so many times before. The title pretty much says it all: Mutant Blobs Attack. And guess what? The story follows a small blob from outer space that must reunite with its comrades and get back to their home planet. Call it lazy storytelling, but the art style gives it a tolerable vibe which keeps you from clawing your eyes out.  Don’t expect too much from it, but enjoy its weird take on an old and tired trope.

Gameplay is where this title fares much better. This is a score attack game which, with its evident and tantalizing point beads, will keep you coming back for more. The gameplay mainly involves you maneuvering your gelatinous protagonist with either your mouse or WASD keys.

The keys were more responsive and smooth for me, but it could be possible to play with only your mouse. The main goal of this (like pretty much every other platformer) is to reach the end of the level, hopefully with the most points possible. You achieve this by guiding your blob to every consumable morsel in the environment. Everything you swallow makes you grow and allows you to ingest bigger objects and jump higher. There also tend to be many plugs in the environment which can only be passed when you are bigger than they are. There will be quite a bit of backtracking as you try to get the bigger items you missed earlier in the level.

Visually, Mutant Blobs Attack is very nice and features the distinctive style known from Drinkbox. The graphics are bright and clean and very interesting. For example, the beginning of the game finds you in a college dorm where you will find the staples of life there. Beer pong, textbooks and passed out students will be seen giving the place an inhabited feel. The music isn’t as interesting with such hits like ‘Video Game Music #3’ and ‘Repetitive beat #8’. But hey, it doesn’t hurt to mute the game and listen to your own tunes, if that’s your sort of attitude. 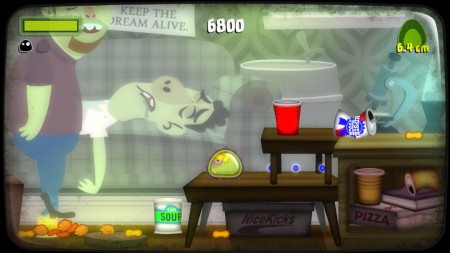 For the time, this was a something new and fresh in an almost 25 year-old genre. But now with so many replications of the same thin, it’s not the best platformer out there- but not the worst either.

If you liked the other Drinkbox games and thought them to be good, then do give this a try. Even if you don’t, Mutant Blobs Attack is still a solid selection, especially if you happen to pick it up on sale. But for those who would rather wait for the bigger (blockbuster) releases coming in the following months, I can’t really say this is for you.

All in all, a well spent couple of hours that I do not regret losing, but hey everyone is entitled to their own opinions.

A young lad on a magical journey through the dark and terrifying world known to many as "the industry". From his hellish prison, Isaac can hear the cries of pain and suffering from those who came before him, only to hear their hearts stop in utter terror. Video games aren't all fun and games kiddies.
Previous Dark Matter darkens Steam’s doorstep
Next Deus Ex Human Revolution Director’s Cut Wii U gameplay