Classic cartoon/toy fans rejoice, IDW has a new comic coming up that you’re going to want to add to your pull list. 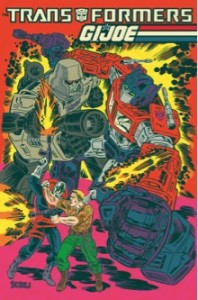 Looking back, I don’t think there were too many more cartoon properties in the ’80s that I was a bigger fan of than G.I Joe and Transformers. Outside of Voltron and He-Man, I absolutely ate up anything with either big transforming bots or Joe vs Cobra. So it’s with a particular interest that I saw the press release from publisher IDW their new ongoing Transformers/G.I. Joe series.

“This is a dream project for me,” says Barber, “and I’m blown away by the imagination and the unique take that Tom Scioli is bringing to this project. It harkens back to classic comic traditions—and to the origins of the TRANSFORMERS and G.I. JOE characters—but feels constantly, irrepressibly new!”

“This feels like the comic I was born to make,” says Scioli. “We’re asking big questions. Is war an inevitable condition of life? What is free will? What is the future of man and machine as the line between them becomes increasingly blurred? The G.I. JOE team is trained to deal with dangerous situations and this is the ultimate test of their training. The TRANSFORMERS characters push the boundaries of what shapes life can take in this infinite universe of ours. Perhaps it will be a machine that teaches us what it is to be human.”

This certainly isn’t the first time that these two toy juggernauts have crossed paths in the comics, but it certainly is the first ongoing series they’ve had. IDW points out that both Transformers and G.I. Joe have massive fanbases (right here) through just about every entertainment medium there is and they’re spot on. These are the classic, most iconic versions of the characters here too, so older fans should be particularly stoked for this one.

Jason's been knee deep in videogames since he was but a lad. Cutting his teeth on the pixely glory that was the Atari 2600, he's been hack'n'slashing and shoot'em'uping ever since. Mainly an FPS and action guy, Jason enjoys the occasional well crafted title from every genre.
@jason_tas
Previous SNOW hits Steam early access
Next NYCC: Dark Horse officially announces The Witcher