Disney tries it’s hand at the emerging ‘toys to life’ genre with Disney Infinity. More than that though, the entire game is a love letter to fans of the classic studio. 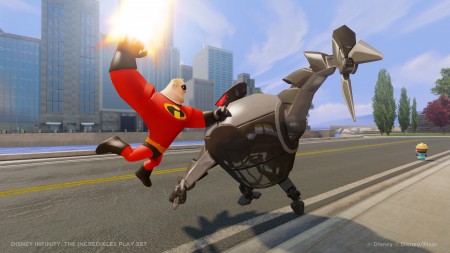 I really wanted to like Disney Infinity a lot, and I mean A LOT. I’m a big fan of what Activision has done over the last two years with the Skylanders brand and I think the toys to life ‘genre’ is absolutely terrific for a couple of reasons. First off, it’s an idea that not only really took off and proved popular with gamers, but also gave the toy market a badly needed shot in the arm.

Skylanders toys are one of the top toy lines in the US right now and that’s directly related to the game and the genre that it created. As a toy fan, who doesn’t want to see the industry get dinged up any more than it already has in this new millennium, I like that. I don’t however, like Skylanders just because of that. Bottom line, the games are fun and imaginative- with or without the inaction figure component.

This is one of the problems that I have with Disney Infinity. There’s a lot going on here to like, tons in fact, but there are some lingering issues and they kind of sour the experience to some degree. But lets start at the top.

Inside the Disney Infinity starter box, you’ll find a copy of the game, three Disney Infinity figures (Jack Sparrow, Mr.Incredible and Sully from Monsters Inc) and a power base for you to plug those figures into. You’ll also get a token to use with the base, to get you familiar with the idea of buying these blind-bagged little guys that can unlock certain things in the main game.

In Disney Infinity placing your character and starting the game gets you to the Toy Box mode. Toy Box is an open world canvas of sorts where you can build anything you like… eventually. You’ll need to unlock most of the stuff that you’ll actually want to use. This actually isn’t all that hard and happens pretty organically as you play. Busting up crates and doing other things in-game gets you blue orbs that count towards your available reserves so you can buy new things to play with.

There’s some really cool stuff in here too like items from Ducktales, Aladdin and any other number of Disney properties. It is kind of annoying that you can’t actually select what you want and buy it as everything’s random, including which items you can pick from at any given time. If you play the game a ton though, it won’t be too terribly long before you probably have everything you want- but still.

Toy Box isn’t just some walk in the park place where you can build a passive town or scene with all this stuff either, you can construct almost whatever you can think up in terms of landscaping too. Making structures like a race track or even a desert city, complete with the guards from Aladdin, are all possible. Hopefully, with future DLC there’ll be even more settings and items to use, but there’s a solid selection right off the top that you probably won’t get bored with for a while.

All of this can be a bit tough to control, nothing that should hold you up for too long mind you, but placing items at times can be a chore. In particular, I had a devil of a time putting new land pieces in the place where I wanted them when I started to really make a world and not just screw around. Oh and you can do that too by the way. Making a mixed up place where the sky reflects a version of Alice’s Wonderland and killer robots run amok is very possible and will probably take up the majority of your time in the mode when you start. Also notable here is that the menu is more than a little convoluted and the sheer number of things you can do can be a double-edged sword and even get pretty daunting at times.

On the other side of the coin from the Toy Box mode are the Playsets. Just like in the action figure ‘world’ playsets are complete settings for you to play in and worlds all their own. Remember as a kid getting all those Star Wars sets that reflected one of the scenes from the movies? This is the same idea except you get to play in the environment with your on screen character instead of your plastic, real world figure.

A trio of playsets all wrapped up in one clear plastic piece are included in the set to get you started. The three sets are themed to fit the three figures that are included and give you a nicely varied experience. Each one plays pretty differently and actually supplies a decent amount of play time too. They’re almost complete games unto themselves and there’s more on the way as Disney Interactive currently has a Lone Ranger set available and a Toy Story set on the way.

It’s in this way that it’s easy to see that Infinity is really meant to be a platform. Much like the way that Zen Studios’ pinball title constantly evolves with multiple tables released for it throughout the year, Disney Infinity can go forward with new playsets seeing retail release, thus giving gamers more game to play without a full-on sequel really being necessary. It’s a pretty cool mechanic, but one that I’m not sold on completely.

This might sound odd since I did say a lot of pretty nice things about it, but I would have preferred a central narrative be included in the game where you could battle through something like a nexus of Disney films and TV shows, swapping characters all the way. I’m not saying that I think that the playsets and the whole platform format are bad ideas, not at all, I just found that the Toy Box mode in and of itself really didn’t do it for me and I would have liked to a have had a cohesive game where I could swap characters (since that’s not something you can do in a playset).

When I think about it, there’s a lot to like and a surprising amount of things not to like about Disney Infinity. The upside for the game is that the things that aren’t so hot are neither glaring nor gamebreakers.

Toy Box mode is monstrous and has so much going on that it can almost be too much at times, and the individual playsets can be a little too limiting here and there since you’re forced to use only the characters that match with the worlds they exist in. Of course, Toy Box is also all kinds of fun once you really get going and, if you’re so inclined, you can make some incredible stuff with it.

And the playsets, from what I’ve seen, could actually stand on their own almost across the boards and provide unique game experiences fans of the individual universes that they represent, with some great fun. I can see the future is going to be pretty bright for Infinity too as there are dozens of Disney properties that can be made into playsets and accompanying figures.

As it is, Disney Infinity is solid now and should be even better given some time.

Jason's been knee deep in videogames since he was but a lad. Cutting his teeth on the pixely glory that was the Atari 2600, he's been hack'n'slashing and shoot'em'uping ever since. Mainly an FPS and action guy, Jason enjoys the occasional well crafted title from every genre.
@jason_tas
Previous Pokemon X & Y branded 3DS XL consoles in stores now
Next Injustice: Gods Among Us announced for handheld and next-gen