Yes, Doctor Octopus is back, how exactly that’s possible with Doc Ock being Superior Spider-Man right now I don’t know. Either way though, the Hulk isn’t too happy about it. 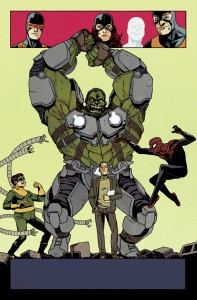 The Doctor is in this October as the Arms of the Octopus crossover event continues in Indestructible Hulk Special #1 – and the Hulk has something to say about it! From the dynamite creative team of Mike Costa and Jake Wyatt, comes the return of one of the Marvel Universe’s most nefarious super villains. But how is Doc Ock alive?! The Superior Spider-Man can’t be happy about that, and what does Ock want with the All-New X-Men? Bruce Banner is going to help them get to the bottom of this!

But not before coming face-to-face with the shocking return of another believed-dead villain – the dreaded ABOMINATION! Between Banner’s brain and Hulk’s brawn, is it enough to take on the combined terror of Doc Ock and the Abomination? Don’t miss Indestructible Hulk Special #1 for the answer!

Seeing Doc Ock alive and in classic form is pretty awesome form a fan’s perspective. I know a lot of folks were upset at the Superior Spider-Man storyline when it debuted for how it treated Peter, but as a huge Doc (and classic Sinister Six) fan- I wasn’t too happy about how it treated (and continues to treat) the good doctor! So with that, I’m all smiles to see him return in any form.

As for the Abomination, he’s a happy surprise as well. He’s yet another classic Marvel villain that I’d love to see back on a permanent basis.

This whole book looks like a lot of fun though- you’ve got the Doc, SpOck, the classic X-Men and of course- the Indestructible Hulk. Grab it when it hits stands and the Marvel App on October 16th.

Jason's been knee deep in videogames since he was but a lad. Cutting his teeth on the pixely glory that was the Atari 2600, he's been hack'n'slashing and shoot'em'uping ever since. Mainly an FPS and action guy, Jason enjoys the occasional well crafted title from every genre.
@jason_tas
Previous Bayonetta anime trailer
Next DST brings new Marvel and The Walking Dead Minimates to market