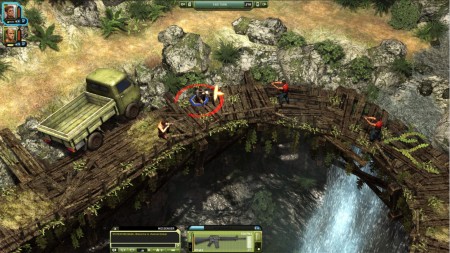 I have a special place in my heart for the Jagged Alliance series. I was fortunate enough to have played the original, back in 1994, and enjoyed it a lot. It was definitely one of my favorite mid-90s games. When I had the opportunity to check out the latest iteration of Jagged Alliance, simply called Jagged Alliance Online, I couldn’t help but step up and volunteer! I wanted to see how the series has changed over the last — gulp! — (nearly) two decades.

The most significant change is in the payment structure — Jagged Alliance Online is free. Yup! You heard me correctly: F-R-E-E! If you’re a skeptic like me, you’re probably squinting your eyes in a mistrusting way, waiting for the caveat. Okay, so there is a catch. The catch being that if you want to play the traditional single-player game, you’re going to need to shell out $60 (or $30 each for the 2 stand-alone single-player campaign DLC), but the multiplayer is absolutely 100% free to play.

One of the things I really appreciate about Jagged Alliance Online is the line from their product description on Steam: “[Jagged Alliance Online] is fair to play, allowing you to earn anything that can be acquired in the game by playing – so it is YOUR tactics that count!” The free-to-play model became popular for games on Apple and Android mobile devices, and depending on the situation, you may sometimes end up hitting that payment wall, where you cannot possibly proceed without spending real money. This isn’t the case with Jagged Alliance Online, and I’m glad developer/publisher Cliffhanger Productions stated this openly. 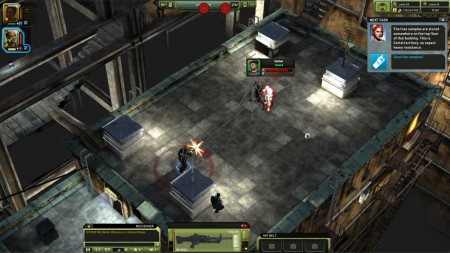 While most popular online games tend to be fast-paced, Jagged Alliance Online eases back on the throttle. Like its predecessors, it’s a turn-based action-strategy game. This may be a turn-off to some gamers who are looking for immediate action, but for those who like to plan out a course of action before running in guns blazing will enjoy this title.

The game looks and feels like the game I remember playing back in 1994. Those who have tried Firaxis’ reboot of XCOM from last year, Jagged Alliance Online feels a bit like that with both in terms of the turn-based actions and tactical elements.

Jagged Alliance Online has a nice 3D engine – the graphics are nice, and the game employs the familiar isometric point-of-view.

The customization of your mercenary (and team) is pretty impressive. There are over 40 different mercs to choose from, each with their own attributes. When it comes to being an effective killing machine, you have more than 500 different weapons and gear. Weaponry and armor can also be upgraded through a crafting system.

Jagged Alliance Online’s takes the action offline through two mode comes in the form of two premium single-player packs. The Shadow Edition and Ivan Edition (interesting name, by the way, makes me think of a big burly Russian guy) are $30 each.

In addition to new missions and objectives, new AI-controlled enemies, and achievements, you’ll also unlock exclusive content and currency to use in the online. While I didn’t log any where close to this, but Cliffhanger Productions is claiming that the campaign will offer players more than 100 hours of single-player goodness! It says so on product description, and it’s ALL IN CAPS SO IT MUST BE TRUE. In all seriousness, I think their claim is pretty accurate.

In my opinion, Cliffhanger Productions has done a great job in taking the classic Jagged Alliance and giving it a real modern-day uplift, both in terms of the gameplay and the payment structure. The main online component is free, allowing gamers to play the game without spending a single cent, and acts as something of a demo to help them determine if they want to spend their money on the extra single-player packs. I wholeheartedly support this model, and I hope Cliffhanger find Jagged Alliance Online to be a profitable success. Check it out on Steam! I really enjoyed this one!

Because Jagged Alliance Online is a free game that I can honestly recommend you downloading and trying the game for yourself before you entertain the idea of purchasing the premium content. Old-school fans of the series will appreciate the familiar look and feel to the earlier games in the franchise, and I think it feels relevant enough to appeal to more modern strategy gamers.

Troy is the Features Editor at Brutal Gamer. When he's not writing about or playing video games, he's enjoying life with his wife and children. He also loves coffee. And lots of it.
Previous Charles Dance joins the cast of The Witcher 3
Next Skylanders outsold all other action figure lines in 2013 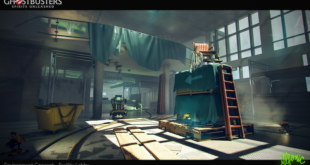 Here’s a taste of what’s on the way for Ghostbusters: Spirits Unleashed in 2023