It’s been a long wait for this highly anticipated cross over strategy game. Now that Project x Zone‘s release has finally come to pass, is it living up to the excitement built up over it this past year? 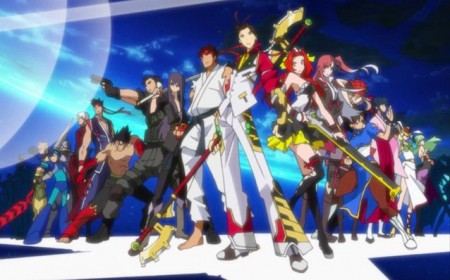 Project x Zone is a crossover tactical role playing game involving characters from various series, like Megaman X, Space Channel 5, Tekken, Street Fighter and more. Franchises from Sega, Namco Bandai, and Monolith Soft debut in this game, and the size of the roster that these three publishers have made possible is astounding.

The gameplay is a rather unique combination of strategy and turn based action. Your characters are  controlled on a grid much like you’d see in games such as Fire Emblem or Shining Force. There are at least 2 characters to a team, with an extra space for solo units that can be used once per battle. There are varying requirements that you must meet in order to clear the maps in each level, sometimes they’re as simple as defeating a boss, while other times you have to clear the map of all enemies.

Each map is filled with foes that you engage by pressing Y after your character is placed beside them. Once you initiate a battle, you’re taken to an arena that’s fashioned after the map you’re playing in. This is where the game shines; the units you control mercilessly attack the monster they’re engaging all at once. Who could say no to Ryu using his hadoken, combined with Megaman X’s buster and  Mishima Heihachi’s iron fist? Battles turn into a hectic mess, sometimes you find it difficult to pay attention to one thing or the other as all fighters are delivering torrent of attacks. 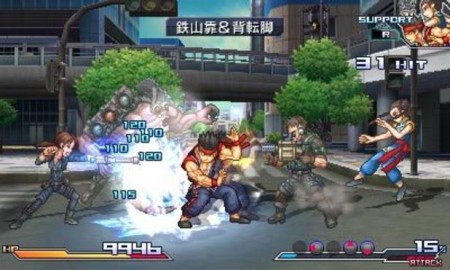 Besides a fighter’s basic abilities, there are also special attacks that can be used by pressing Y. They can only be used when you have available XP, which is built up as you fight, or by using various items that increase XP. Once you initiate the special attack, the two main units you’re using are shown in beautifully animated closeups while their sprites are shown assaulting a monster.

For example, Ken is seen doing a tatsumaki senpukyaku and a shoryuken, followed by Ryu delivering a devastating blow with his hadoken, blowing the enemy away in the distance. After the special attack is used, the battle ends whether your foe is defeated or not. It’s even cooler looking than it sounds, and entertaining to watch many times over.

As appealing as this is, it can unfortunately get repetitive after some time, due to the fact that the combat system isn’t very deep. While you do have to time your attacks right to keep a foe juggled in the air, it’s basically rinse and repeat for good hour or so until the level is cleared. Strategy doesn’t get any more complicated than heal and attack, and the gameplay never really evolves all that much.

At most you get more combinations such as being able to press A and D pad down or up to activate other attacks. As the game progresses you do get more units, but the variety doesn’t quite increase with more of them. The same goes for the enemy unit numbers; they bolster with time, but it only manages to make stages more tedious. The story is pretty basic, showing the heroes from each universe teaming up with one another to take down the villains from both their respective universes and the Project x Zone world. The plot doesn’t get any more complicated then this, but it does get the job done. 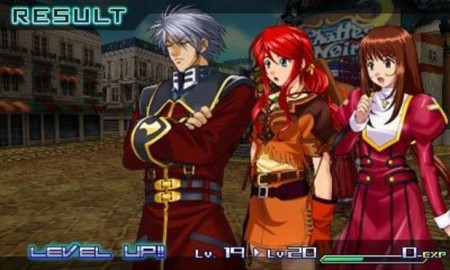 The real treat is observing the fighters interact with one another, both in battle and story wise. You can’t help but smile when you see Mishima Heihachi offering Ryu to be his adopted son, or observing Arthur and Dante chit-chat while slaying demons. It is these moments and more that show just how much of a love letter this game is to fans. Of course, the interactions aren’t without faults, as they can sometimes be rather nonsensical and make you question why the developers put them in the game at all. Dialogue can at times, drone on, as some of the fighters go on tangents that you wish would just end after some point.

The sound in Project x Zone is superb though, with crisp and clear sounding voice overs for each character. Some of the music is also nice to just sit back and listen to when you’re playing, especially themes of the various fighters in the game. When a unit’s turn comes up, their theme plays on the map and during fights. I must confess that it never gets old listening to Chun-Li’s music every time she is available to use.

Project x Zone is a mixed bag of well crafted fan service and gameplay that is somewhat lacking.

It’s the type of title that you would absolutely love if only it didn’t fall short in the way it was designed. It’s flashy, charming, and has something for just about every fan of Sega, Namco and Monolith Soft. If you’re looking for deep and challenging strategy gameplay, then this is probably not the title for you.

What it does offer though, is a simple and fun way to watch your favorite characters from different universes interact and fight alongside each other.

Well, my name's Christopher Deleanides as you all know and I'm the Nintendo Editor here at BG. I've been playing video games since 1992, and I've been a Nintendo fan the entirety of those years. My love for video games as well as Nintendo hasn't changed, and probably never will. The only thing that comes close is politics, as I'm very deeply involved in both local and international issues.
Previous Ultimate Spidey welcomes Deadpool
Next The Walking Dead: 400 Days now available