Wii U feels the force, gets Star Wars Pinball 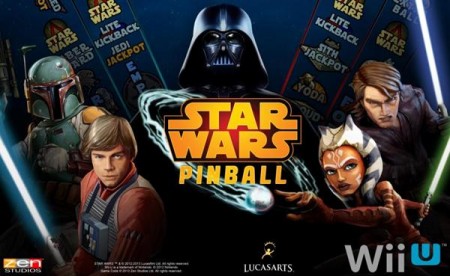 Zen has seriously captured some of the force in a jar with their Pinball series with some incredibly faithful recreations of the base pinball arcade experience. If you’re old enough to remember playing a few rounds of steelball in an arcade or pizza joint, then the tables in Zen’s games will strike a serious chord that will have you addicted in no time flat.

It’s not that the tables in Zen’s games are actual pinball machines from the days of yore, but they just feel right, if that makes any sense. Right there with the best of them too is the Star Wars themed set that the developer released not all that long ago. Already on a number of platforms, Zen now has Star Wars Pinball inbound for the Wii U and it’ll not only have everything that the other versions of the game have, but it promises some very cool GamePad functionality as well.

The second screen will play host to “additional controls and game information including dot matrix, scores, and challenge information”. And of course, you can play ‘off TV’ with it as well. For that alone, this might be the definitive version of the game.

Jason's been knee deep in videogames since he was but a lad. Cutting his teeth on the pixely glory that was the Atari 2600, he's been hack'n'slashing and shoot'em'uping ever since. Mainly an FPS and action guy, Jason enjoys the occasional well crafted title from every genre.
@jason_tas
Previous Armikrog adds Wii U edition to Kickstarter
Next Harbinger Wars #4 (comics) Preview