Konami has officially announced that the Metal Gear spinoff will be making its way to the PC. 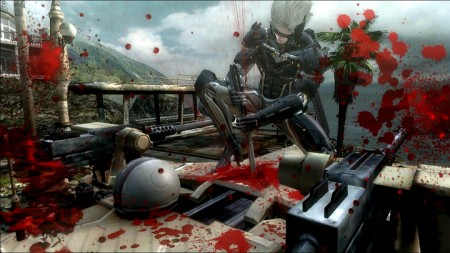 Metal Gear Rising: Revengeance is a very different breed than most other Metal Gear titles in that it’s pretty much all action. You won’t find any sneaking suits here as cyborg ninja Raiden is all about hacking and -yes- slashing his enemies into little, tiny bits of robot coleslaw.

Highlights? Sure, we’ve got highlights:

• The Latest METAL GEAR Experience: Featuring an all-new style of frenetic action gameplay and central character, Raiden, a cyborg ninja who uses his High Frequency Blade to cut through anything that stands in his vengeful path!

• Advanced technology: The in-game technology promises to push the boundaries of graphics, style and lightning-speed action at a blistering 60 fps on most modern PCs

• ZanDatsu Cut Mechanic: Take advantage of what has been created – “an all-encompassing cutting plane in real time.” Cut what you want, when you want, any way you want.

We had a database malfunction a while back and, though our review of the game was lost, we gave MGR:R an 8 and really liked the game quite a bit. So if you’re on a PC and feel like slicing and dicing, you might want to check out Metal Gear Rising: Revengeance from Konami.

The game is available now on the Xbox 360 and PS3 and will be out soon on the PC.

Jason's been knee deep in videogames since he was but a lad. Cutting his teeth on the pixely glory that was the Atari 2600, he's been hack'n'slashing and shoot'em'uping ever since. Mainly an FPS and action guy, Jason enjoys the occasional well crafted title from every genre.
@jason_tas
Previous Say hi to Scourge: Outbreak’s Amp
Next Fable III Currently Free On Xbox Live Games On Demand