Home / Comics / LEGO Marvel Superheroes face off against the Destroyer

LEGO Marvel Superheroes face off against the Destroyer

Thor’s rogues gallery makes an appearance in the newest set of screenshots of the upcoming LEGO Marvel Super Heroes game along with one half of the Fantastic Four. 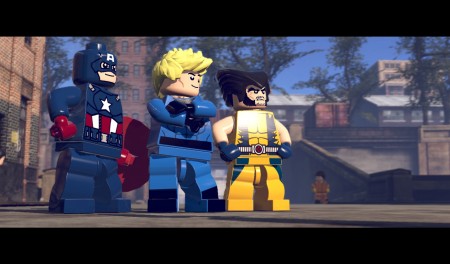 Okay Marvel fans, get ready to start geeking out at the heroes and villains that are set to appear in Traveller’s Tales’ take on the Marvel Universe. The newest set of screens for the upcoming game show not only the already announced Thor, Captain America and Wolverine, but also Reed Richards and the Human Torch from the Fantastic Four.

As a big fan of the classic Marvel U, that’s just awesome to lay eyes on. Also in the screens are a pair of baddies in the form of the Destroyer and Loki. The announcement states that, just like in the Thor movie, the big metal guy will be a pawn of the trickster god. Also kind of neat is that your team of heroes will be facing this gruesome twosome in Asgard itself – which come to think of it, would make a pretty awesome LEGO playset… So would Asteroid M, Stark Tower and the X-Mansion; all places that you’ll visit in the game.

Actually, when are we going to see a LEGO FF set? Come on guys, you can’t have a game with the Fantastic Four in it and not have a LEGO set to go along with it! Well, I guess you actually can, but still…

Look for LEGO Marvel Superheroes to arrive for the Xbox 360, PS3, PC, Wii U, DS, 3DS and PS Vita this Fall. As for LEGO sets featuring the Fantastic Four, I’m just saying that you guys in building block HQ should think about it- just think about it.

Jason's been knee deep in videogames since he was but a lad. Cutting his teeth on the pixely glory that was the Atari 2600, he's been hack'n'slashing and shoot'em'uping ever since. Mainly an FPS and action guy, Jason enjoys the occasional well crafted title from every genre.
@jason_tas
Previous Focus Home teases Blood Bowl II
Next Saint’s Row IV is the most dramatic game ever