If you’re sneaking on over to the London MCM Comic Con this weekend, you might want to stop off at the Xbox360achievements game stage to check out some stealthy Splinter Cell Blacklist action. 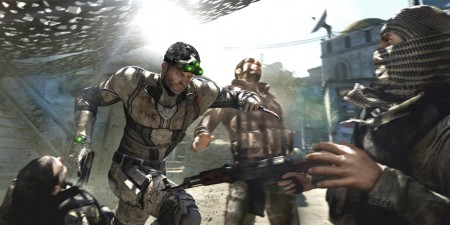 Extra ‘cool’ points for this one because Splinter Cell art director Scott Lee will be there and will actually be the one demoing Blacklist. Even cooler- Lee will be playing through sections of the game that’ve never been seen live in the UK before.

After each of the three play sessions, he’s even going to hang around for a bit and do some signings, so make sure you bring your Ubisoft and/or Splinter Cell goodies for autographing.

Here’s your schedule for the show:

In the first of three Splinter Cell Blacklist sessions, Ubisoft gives us a rundown (with gameplay) on what gamers can expect from their latest title in the popular franchise.

Stealth purists rejoice! Ubisoft will be on hand to give fans a run through of Splinter Cell Blacklist, the way Splinter Cell fans will be used to… with buckets of stealth!

The third and final Splinter Cell Blacklist session puts action at the forefront as Ubisoft shows fans who aren’t enamoured with stealth that aggressive action gameplay is just as viable.

The Uk’s number 1 pop culture and comic con, the London MCM Comic Con will be held in London (shock!) at the Royal Victoria Dock, May 24th through the 26th.

Jason's been knee deep in videogames since he was but a lad. Cutting his teeth on the pixely glory that was the Atari 2600, he's been hack'n'slashing and shoot'em'uping ever since. Mainly an FPS and action guy, Jason enjoys the occasional well crafted title from every genre.
@jason_tas
Previous Indie Developers Can’t Self Publish On Xbox One
Next New Star Trek deluxe hardcovers on the way