RIFT, the award-winning online game from Trion Worlds, will adopt a free-to-play business model starting next month. Players will be able to experience the entire game world; every dungeon, every zone, and every level and get full access to all current and future game updates. 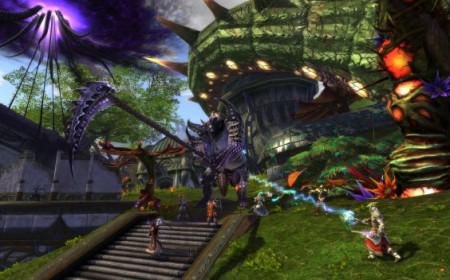 All players will be able to explore the entire world of Telara for free and will have access to the expanded in-game RIFT Store where a variety of services– mounts, boosts, wardrobe items, and more will be available for purchase. An optional subscription will still be available that grants a slew of “Patron” benefits and bonuses to maximize the RIFT experience.

In a not so surprising fashion, RIFT is following in the footsteps of Most MMOs today. Becoming Free To Play is getting increasingly popular among MMOs such as SWTOR (Star Wars The Old Republic) and WoW. Their will certainly be limitations of course, Because Trion certainly dont want their current paying community to cause an uproar. From what my research tells me, current users will be given loyalty and currency rewards for their time spent playing thus far.

“We have been listening to feedback from our players and watching the continuously developing MMO community, and are now ready to launch RIFT as a premium free-to-play experience,” said Bill Fisher, Creative Director of RIFT. “After taking our time and planning a careful transition; we are very excited to bring an enhanced game experience to everyone, without barriers.”

RIFT free-to-play kicks off with massive content update 2.3, Empyreal Assault, which will open up an unforgettable new zone, world event, chronicle and much more. Empyreal Assault launches on June 12th, 2013 for all Ascended of Telara.

Providing an Insight into the immersive world of Video Games one game at a time. I love to write about everything Bethesda. I’m slapped daily for never playing Zelda (what?! - ed). I'm one of the few Irish video game writers.
Previous The Bridge Direct starts hinting at SDCC Hobbit exclusive
Next Assassin’s Creed 4 raises the flag on new trailer