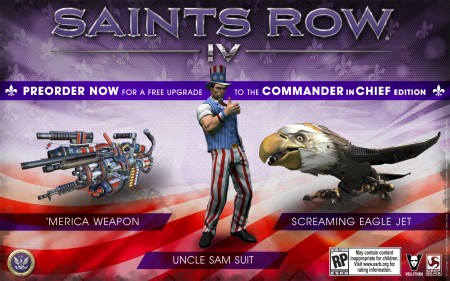 Well, if they don’t do it for you, maybe a ridiculously massive piece of hardware called the ‘Merica weapon will? And while we’re at it, how about a jet painted up to look like a giant eagle, thrown in for good measure?

That gun… how could you even carry something like that?! Not that you probably won’t need it in Saints Row IV, because considering what the Saints are up against, they’ll need all the help they can get. In SRIV, the gang in purple goes head to head with some nasty alien invaders in a winner take all battle for Earth. And America. ‘Merica!

Look for Saints Row IV to cruise into retail stores on August 20th in the US and on the 23rd globally. The upgrade to the Commander in Chief edition of the game is free, but you’ll need to get that preorder in to secure it for your copy of the game on either the Xbox 360, the PS3 or the PC.

Jason's been knee deep in videogames since he was but a lad. Cutting his teeth on the pixely glory that was the Atari 2600, he's been hack'n'slashing and shoot'em'uping ever since. Mainly an FPS and action guy, Jason enjoys the occasional well crafted title from every genre.
@jason_tas
Previous Crack that cold beverage with DST’s new lineup of bottle openers
Next Nordic Games Get Darksiders & Red Faction In THQ IPs Auction