Going to Chicago’s C2E2 next weekend? Diamond will in full force at the show. 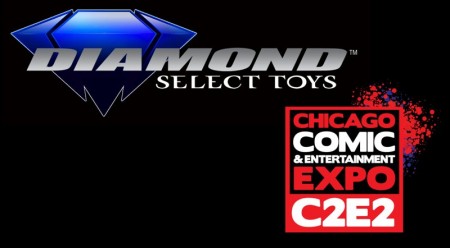 The Chicago Comic and Entertainment Expo is the biggest yearly show in Chicago and one of the biggest comic book and pop culture cons in the US. If you need proof as to just how big the show has gotten, look no further than DST’s schedule. Diamond Select Toys is fresh from their NYCC display this past October and on their way to SDCC in July, but in the meantime you better believe they’ll be at C2E2 with all the awesome stuff you’d expect in tow.

Expect panels, a booth on the show floor, and some nice little freebies:

If you’re going, don’t miss what DST has on display. The company has been quietly producing some of the best comic book, movie, and sci-fi collectables out there for years now and their lineup for this year has so far been spectacular. I can;t wait to see what they’ve got up their sleeves to unveil!

C2E2 is April 26th through the 28th this year and promises to be an awesome time- just in case you missed it, DST will be at booth #603 with the Minimate Museum (which’ll definitely be worth checking out) at booth #1509.

Jason's been knee deep in videogames since he was but a lad. Cutting his teeth on the pixely glory that was the Atari 2600, he's been hack'n'slashing and shoot'em'uping ever since. Mainly an FPS and action guy, Jason enjoys the occasional well crafted title from every genre.
@jason_tas
Previous Victoria II goes into the Heart of Darkness
Next Hitman: Absolution Heads Up EU PS Plus Update