Win a Hobbit prize pack from The Bridge Direct

The Hobbit: An Unexpected Journey is all set for release this coming week on Blu Ray and DVD and to celebrate the occasion toy  maker The Bridge Direct will be giving away a dragon’s hoard of Hobbit goodies. 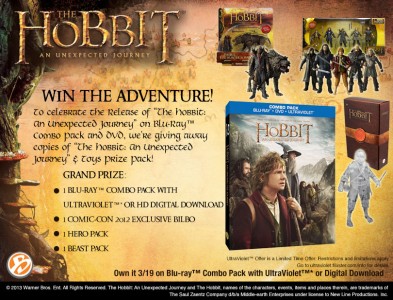 Not only can you win a copy of the movie itself, but there are some very cool Hobbit toys in this treasure chest too- including the ‘you’re not really going to find this at retail’ SDCC exclusive Bilbo from last year’s mega-con in San Diego.

Here’s what the Grand Prize winner will walk out of Mordor with:

But that’s not all- The Bridge Direct also promises that additional copies of the movie will be given away right after a winner has been chosen for the Grand Prize, so your chances just improved Middle-earthers.

Entry for the prize pack is going on right now and will last until the 19th. You can toss your pointy hat in the ring and check out the full rules by clicking here. As for the Blu Rays of The Hobbit that’ll be given away, those are on the docket starting on the 20th (right after a winner is picked for the main contest) and will last through the 26th of this month.

Tags The Bridge Direct The Hobbit

Jason's been knee deep in videogames since he was but a lad. Cutting his teeth on the pixely glory that was the Atari 2600, he's been hack'n'slashing and shoot'em'uping ever since. Mainly an FPS and action guy, Jason enjoys the occasional well crafted title from every genre.
@jason_tas
Previous Dark Horse collects Sacrifice into a deluxe hardcover
Next Wargame AirLand Battle brings on the air support