Being a firm believer that you can only have too much of a good thing, before it’s completely ruined, I honestly thought that Rebellion were propelling themselves down completely the wrong road when they announced Nazi Zombie Army. 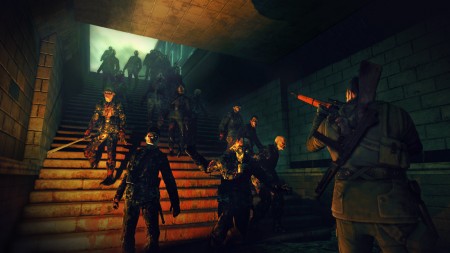 By that I mean that Sniper Elite V2 was a decent enough game; yes it had its issues (one of which being its longevity), but it could still trade punches or bullets with its counterparts without adding zombies.

Dropping zombies into games ruins it 9/10 times, but not when you dress them in Nazi SS uniforms and unleash them into a World War II shooter that has a slow-mo, rather graphic x-ray, bullet time camera it seems. I thought that feature in SE:V2 was amazingly good fun, but when you see the bullet hit the lifeless rotting organs of the walking Nazi dead, it’s even more fun! (Shots to the nether-regions are somewhat more amusing for some reason too).

Anyway, Hitler’s armies are against the wall with their nadgers in the hands of the allied forces; this is quite possibly Hitler’s last stand, there’s seems to be no other option than to raise the dead! I’m not sure that’s how everything went down, but it makes for a good bit of fun for the next couple of hours. You’re one of the few people left alive in Germany and it’s your job to see that you’re the only one alive to leave as you make it from safe house to safe house wiping out hordes of zombies and skeletons (in some places).

The nature of Sniper Elite, in general, limits the replayability of the game. I know I’ve not really touched SE:V2 since finishing it… but the co-op does interest me, providing I can get some people I know and don’t dislike with a passion to come and play it with me. 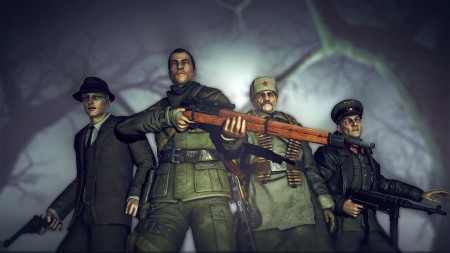 So there’s the story in a nut shell. There’s a co-op option that you can take (if you want) I chose not to, therefor I paid the price for not having friends. There are parts of the game that are designed for co-op that you get force fed while playing single player. Granted, not the games fault I don’t like conversing with mundane teens about “how school was today” or “which boy-band is better”. You know… the kind of things kids talk about these days.

I do genuinely like this game though. It seems very tongue in cheek and I’m not sure how deliberate that was when the game was being made. It looks, feels, and sounds a serious story, until you see a zombie crawl out of his shallow grave and pick up the nearest shovel, oh the irony! Then you have Hitler shouting incessantly over a PA system- in near perfect English. Sniper Elite is a Sniping based game too (if you didn’t get that from the title). But you want to do anything but snipe- despite the fact zombies are make quite the clay pigeon.

You know… all-in-all, all the game has really done is point out that I’m old, and I have no friends. Or at least none that enjoy shooting undead Nazi soldiers enough to buy this and come play with me anyway.

Despite me ranting about the games flaws, as I’ve said, “I do genuinely like this game”. I would welcome this – as would others – with open arms if it was to come to consoles as DLC for SE:V2 or even a stand-alone arcade title.

Sniper Elite: Nazi Zombie Army is an enjoyable addition to the Sniper Elite series. Some parts can be particularly frustrating when playing solo, so it’s probably best to play with friends so you can tackle the co-op designed parts easier.

So apparently Zombies don’t spoil everything their dropped into, especially when they’re Nazi zombies. £7.99 is a fair price for the game too, as there’s a fair bit you can do in there… providing you’re not unsociable or have no friends.

Previous Preview: Bloodshot #9
Next Rambo The Video Game puts the stress on authenticity