In a world where right and wrong is just a blurred line with no clear boundaries, one woman must hunt those who hunt killers.

It all sounds so dramatic, doesn’t it? And rightly so, because from the start Righteous Kill takes the tone of a serious crime drama, right down to the dramatic cut scenes (which are made somewhat less dramatic by the fact the character’s mouths don’t move – but hey, guessing which one is talking is part of the fun, right? Right?). 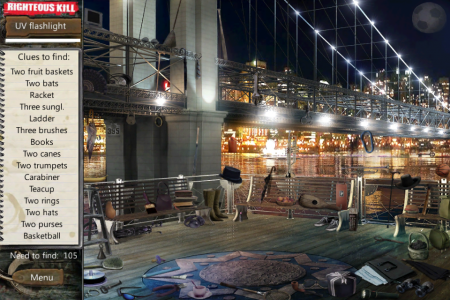 Somewhat disappointing cutscenes aside, Righteous Kill is a game that makes itself on two components: story and object jumbles. And rightfully so – those are the most important factors in what makes up a great hidden object adventure. You buy the game because you like to search for hidden objects, so obviously the jumbles are a huge part of the gameplay. Some of these types of games have you searching around the environment, traveling from locale to locale trying to find various objects before you access the occasional jumble. With Righteous Kill, it is all object searching, all the time – and I loved it. While the cut scenes serve to advance the story and give you a purpose behind your searches, aside from a couple mini games here and there, the entire gameplay is made up of hidden object jumbles in a variety of locations.

The story behind Righteous Kill is that of a police detective (you) who is assigned to a unit that tracks down vigilante killers. While there are some hints in the cut scenes that you may not agree with the assignment, the game doesn’t really examine that part. What is does go into, in detail, is the story of a man who lost his family to a violent crime years ago, and is now presumed to be committing a series of murders as retaliation. 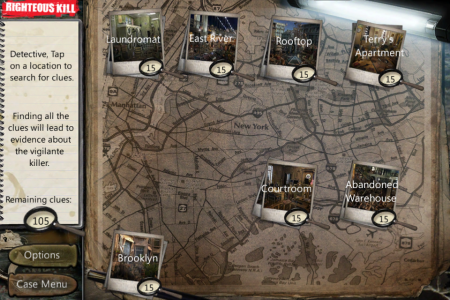 Since the game works pretty hard at sticking to the realism factor, what you’ll do is participate in the police investigation in much the same way as a crime drama portrays it (minus all that messy blood). In each level, you’ll be given an explanation for what it is you are doing, and then directed to search a number of locations related to your task. For instance, you’ll begin by searching through the crime scene and the suspect’s apartment in order to gather clues. While there are a variety of different locations featured in Righteous Kill, you will be going back and forth to the same ones repeatedly throughout the course of the game.

Each of the locales you visit is a hidden object jumble, with a list of fifteen objects (clues) for you to find. On the one hand, the objects in the jumbles remain in the same positions every time you visit, so even with a fresh list of items to find it does tend to make the searches easier each subsequent visit. On the other hand, it does serve to portray the methodical thoroughness that is a competent police investigation – you must visit and revisit to search for things you’ve missed, or to examine things at a different angle based on new evidence.

The jumbles themselves are pretty standard for this type of game. They cover a single screen, and are a mix of easy and challenging to find. If you happen to get stuck, there is a “UV Flashlight” that serves as a hint feature, highlighting one of the objects on your list and then using a timer to refill so that hints can’t be used rapidly. In addition to the jumbles, there are a couple mini games that also fit the crime scene bill, including dusting for fingerprints and assembling torn documents. These are all skippable after a time, but none are all that challenging – and as I said, they suit the story quite well. 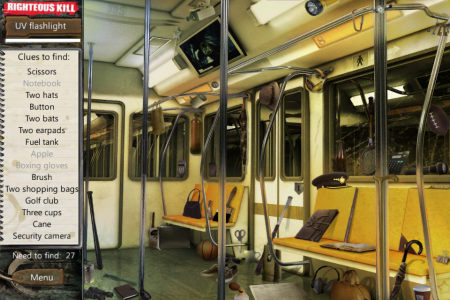 Final Thoughts:
Righteous Kill is a hidden object adventure that drops you right into a scene from your favorite crime drama. Examine the crime scene; search for clues in the suspect’s apartment; and confront a killer. While repeatedly revisiting the same locales gets a bit monotonous at times, Righteous Kill provides hours of challenging hidden object action, and a great story to boot.

U.S. Senior Editor/Deputy EIC at BrutalGamer, mother of 5, gamer, reader, wife to @MacAnthony, and all-around bad-ass (no, not really)
Previous Transformers Prime launch trailer shows off Thunderwing
Next Who wants to go on a picnic with Hello Kitty?