We all have that one game which has a special place in our heart; as soon as you hit the main menu, memories come flooding back. That’s exactly what Worms is for me, the hundreds of hours spent with friends battling each other in the strangest of environments, hoping not to be one to make the first ridiculous suicide of the night. Worms Collection will hopefully let you relive those memories in glorious HD action.

The content of Worms Collection is pretty damn marvellous ; it comes with Worms, Worms: Armageddon and Worms: Ultimate Mayhem, as well as all the downloadable content which was released for the games on Xbox Live Arcade, plus a few little additions here and there. As soon as you through the disc in, the game will ask you which you’d like to play and whether you’d like to install the DLC, you may as well as it only takes 30 seconds for a whole bunch of new levels.

If you somehow never played any of the Worms games (…where have you been for the past 15 years?), we’ll give you a brief overview of this fantastic series. Each player has a team of worms which they control in turn-based warfare with a whole bunch of weapons ranging from a shotgun to the bat-shit crazy concrete donkey. 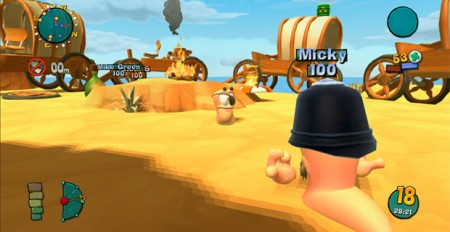 Your only goal is to kill the opposing worms and hope you manage to survive the blood bath in the vibrant lands. You’ll battle your friends in a whole bunch of different settings, most of which make zero sense but hey, you’re throwing exploding sheep at each other, what do you expect? Everything from the stone age to beach paradises will be obliterated in war.

First up, the original Worms; it’s about as simple as the series gets except it features the Xbox Live Arcade HD facelift. If you never managed to pick up the Arcade title (but did manage to play the original many years back), it contains a lil’ bonus content in the form of single player mission to give you that little bit more playtime if you don’t have anyone to play it with. You are still able to play it over Xbox Live or locally.

Worms: Armageddon is basically the original Worms but significantly prettier and comes jam packed with lots of new goodies to play with, such as the hilarious concrete donkey. Everyone has their own preference when it comes to a favourite game in a series but I think we can all agree that Worms Armageddon is (and possibly could be) one of the greatest Worms games ever released due to the weapons and environments which are randomly generated. 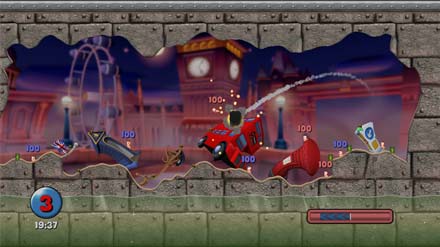 Armageddon also features a pretty extensive single player campaign, consisting of 35 challenges which are designed to prepare your wormy-skills for hectic online action. Let’s be honest here, that’s hardly why you play Worms, it’s all about the multiplayer; both local and Xbox Live play is available for up to 4 players in a whole bunch of different entertaining game modes.

And finally, we have Worms: Ultimate Mayhem, the one most of us Worms’ fans pretend didn’t exist. Instead of the 2D style we grew to love, it attempted to go full 3D and well… it was frustrating back then and it’s still frustrating now. Yeah, it’s a nice change but it just isn’t fun, everything is so much more awkward to judge compared to its 2D brothers.

The Worms Collection really is a great package if you never picked up any of the HD remakes through Xbox Live or PSN. The main problem is that if you did purchase any of them through Live, the collections worth is severely devalued; it’s nice that they did include all the DLC but even that isn’t a deal breaker.

My name is Leigh. I own Brutal Gamer. deeerp.
Previous Saying Good-Bye to Old Games
Next Nintendo cuts price of Wii further