This doll ain’t playing around.

G5 Entertainment brings an eerie feel to the hidden object adventure experience with their newest release, Whisper of Fear: Cursed Doll. As the name suggests, this game features an evil doll, but not of the Chucky variety. Little girls are dying in Dollhaven, and when your niece becomes deathly ill, it’s up to you to figure out why.

Of course, solving the mystery involves a lot of tapping the screen and searching for seemingly innocuous items – such is the formula for a hidden object adventure. There are a lot of different ways developers can go about adding the object finds to a story. Some have all of the gameplay consist of hidden object jumbles, while others take a more subtle approach. Whisper of Fear: Cursed Doll is of the second variety. In fact, a lot of the gameplay consists of you wandering around various locales in and around Dollhaven, trying desperately to figure out what it is you are supposed to be finding.

This sort of gameplay can be good or bad, depending upon your preferences. If you really like a good challenge, Whisper of Fear: Cursed Doll provides that, because a lot of the time you really don’t have any idea what you are looking for, or even where you should be looking for it. You can wander freely about the town and its buildings, once you’ve unlocked them, and the object you are looking for could be just about anywhere. A lot of times, your best bet is to simply try everything, until you find objects you are able to interact with. 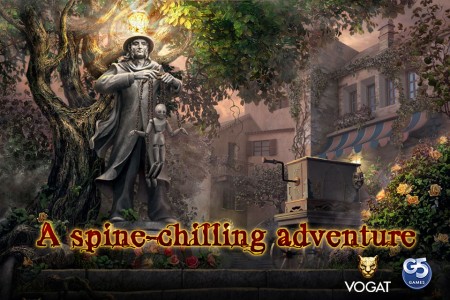 This is not to say that there aren’t any of the standard hidden object jumbles in Whisper of Fear: Cursed Doll. There are; just not as many as I would like. The standard jumbles I am referring to are when you are given a set scene and a list of objects to find within it. These do play an important part in the game, but you will spend just as much, if not more, of your time simply wandering around locales and looking for things that are out of place. This is hidden object play too, just in a different way.

The storyline in Whisper of Fear: Cursed Doll is where this game really shines. While it isn’t anything groundbreaking, the story of a cursed doll and an ill fortuned group of young girls is believable, mysterious, and downright eerie at times(the doll’s eyes–ugh), but it isn’t truly scary – so it should be just fine for players of the younger variety. The story is told in large part by the ghost of a young girl who keeps popping up in places around the time, bearing cryptic messages that foreshadow what is happening in the game. It makes for a good story, and it really fits well with the theme of the game. Because the story is given in small pieces, you won’t feel as though you are watching more than playing. 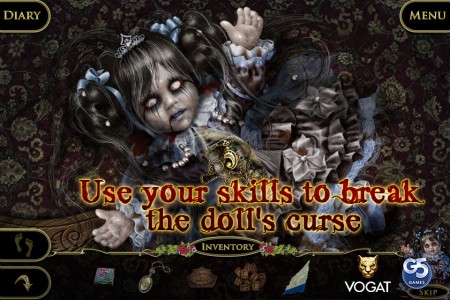 The look of Whisper of Fear: Cursed Doll is spooky and old fashioned, just like you favorite haunted house. While there are many different buildings and areas in the game, most of them have the same abandoned and eerie feel to them. The hidden object jumbles themselves are pretty well laid out, with the objects challenging – but not ridiculously hard – to find.

Whisper of Fear: Cursed Doll does have a hint system in place, should you need it, in the form of a little cursed doll figurine that sits in the corner of your screen. It can be used sparingly, as it refills rather slowly. I found that most of the times I felt like I truly needed a hint in the game, it was in knowing which area to go to, rather than finding a specific object in the room, and the hint feature does not help at all with that, so I found that to be a little lacking, as a point in the right direction can make all the difference if you’re felling frustrated.

Whisper of Fear: Cursed Doll does have an extra feature though, for those who really like to be led through a game. By clicking on the menu tab, you can access a “Strategy Guide” that is basically just a complete walkthrough of the game, chapter by chapter. I’d suggest only taking a look at this if you truly are stuck, though, as it rather spoils the fun to know exactly what to do. 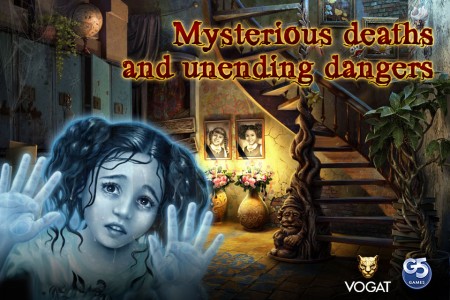 Final Thoughts:
Whisper of Fear: Cursed Doll is a hidden object adventure game that hit the intriguing storyline nail right on the head. The story is good, spooky fun, just in time for Halloween.