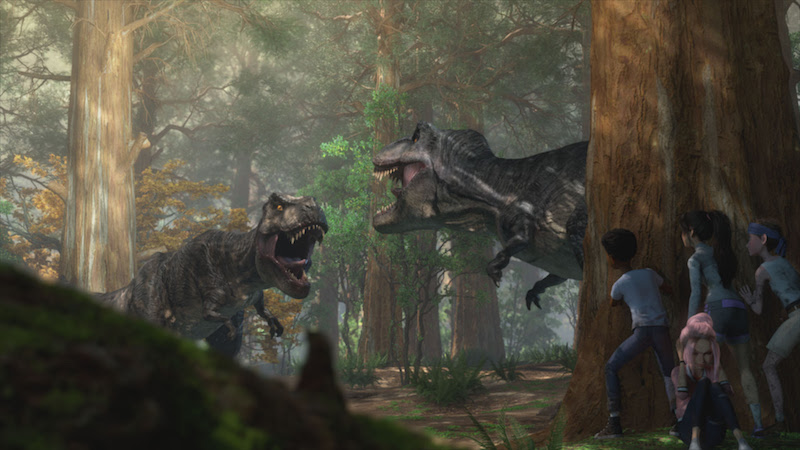 Kind of a dangerous camp

Jurassic Park hasn’t just continued with the Jurassic World series of films, it’s actually spawned a whole universe of prehistoric adventures. A part of that, is Jurassic World: Camp Cretaceous.

Airing on Netflix, the animated serial follows the adventures of 6 teens. Each of them won a trip to the titular Camp, which was situated on the opposite side of Isla Nublar. As fans know, things went south for the park itself, and that included Camp Cretaceous.

Now in season 4, we find the kids shipwrecked and fighting for survival. Check out a trio of clips from the new season, to get you ready for streaming.

Inspired by the Jurassic World franchise, Jurassic World: Camp Cretaceousfollows six teenagers chosen for a once-in-a-lifetime experience at Camp Cretaceous, a new adventure camp on the opposite side of Isla Nublar, who must work together to survive when dinosaurs wreak havoc across the island. From DreamWorks Animation, Universal Pictures and Amblin Entertainment, the series is executive produced by Steven Spielberg, Colin Trevorrow, and Frank Marshall, alongside executive producers and showrunners Scott Kreamer and Aaron Hammersley.

Season 4 of Jurassic World: Camp Cretaceous is airing right now, only on Netflix.

Jason's been knee deep in videogames since he was but a lad. Cutting his teeth on the pixely glory that was the Atari 2600, he's been hack'n'slashing and shoot'em'uping ever since. Mainly an FPS and action guy, Jason enjoys the occasional well crafted title from every genre.
@jason_tas
Previous A new Kingdoms of Amalur expansion is coming, and it hits this month
Next Trailer: FISHLABS’ Chorus melds woman and machine in one gorgeous looking space-shooter