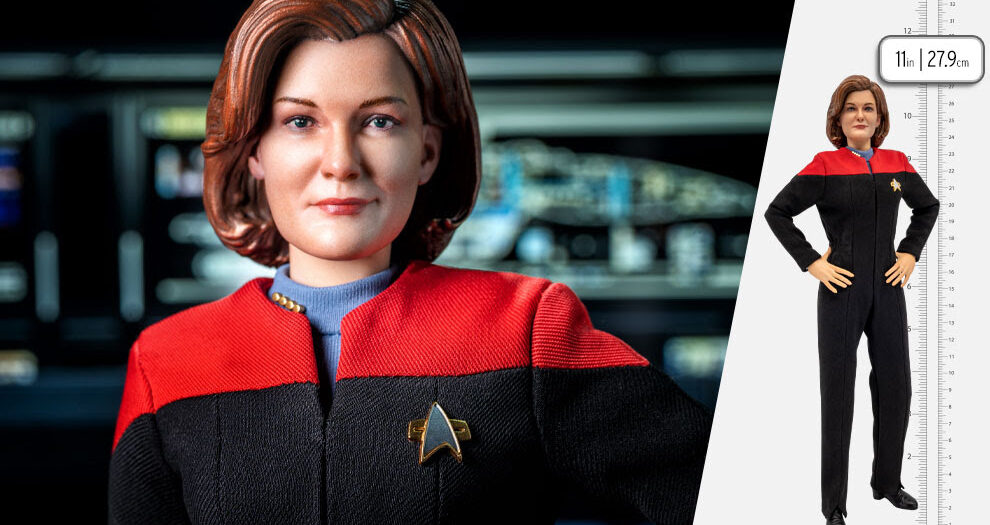 The Captain of the Starfleet vessel Voyager is joining EXO-6’s lineup of 6th scale figures. Get a detailed look at Captain Katheryn Janeway in this new video.

The 90s were really the golden age for Star Trek fans. Without even counting the films, the property had what turned out to be a trio of incredibly successful TV shows. Of course, those were The Next Generation, Deep Space 9, and Voyager.

High-end collectible company EXO-6 has so far started two different series’ of figures based on those shows. We’ve seen Captain Picard and Lieutenant Commander Data from TNG, as well as The Doctor from Voyager. Now you can add one more character from the latter show, with it’s own Captain Janeway.

As the first female Captain to headline a Star Trek series, Kathryn Janeway shepherded the USS Voyager through the Borg-infested Delta Quadrant and safely returned her crew home after seven successful seasons. Janeway would not hesitate to defy Starfleet protocol and would often lead away missions herself, even into a Borg cube where she would make sure she’s the last one out!

Captain Janeway led her crew as a wise single parent, even guiding the holographic Doctor and Seven of Nine, a former Borg, into growing and learning what it meant to be human. Kate Mulgrew’s portrayal of the brave and resourceful yet warm and vulnerable captain endeared her to the millions of fans that cite Voyager as their favorite Star Trek series.

Captain Janeway is up for pre-order now via Sideshow Toys. She’s priced in at $190 USD, and set to ship out some time from December of this year, through March of 2022.

Jason's been knee deep in videogames since he was but a lad. Cutting his teeth on the pixely glory that was the Atari 2600, he's been hack'n'slashing and shoot'em'uping ever since. Mainly an FPS and action guy, Jason enjoys the occasional well crafted title from every genre.
@jason_tas
Previous Sci-fi sequel ELEX II dated, landing on PC and consoles on March 1st
Next Mario Kart 8 Deluxe (Switch) Review